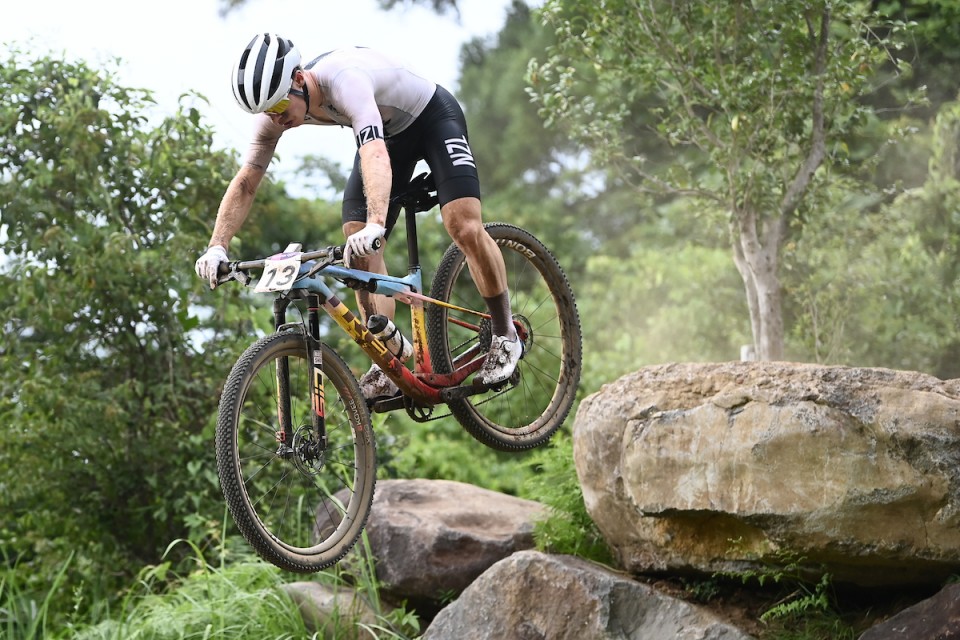 National mountain bike champion Anton Cooper returns home for the summer reflecting on his best year on the world stage.

He finished eighth overall on the UCI Mountain bike cross-country rankings and sixth in that brilliant performance at the Tokyo Olympics.

The Trek Factory professional believes his seminal season that has left him with the belief that he belongs in the elite group at the top of the sport and that a world cup victory is within his capability and clutches.

His performances were the highlight for kiwi mountain bikers on the world stage this year. The shining light for gravity riders coming in the form of emerging young talent in another covid-compromised World Cup season that included a double-round shoe-horned into the orphan stop at West Virginia, USA which rather skewed things for many who did not, or could not, cross the Atlantic.

While our proven performers had moments – like George Brannigan’s eighth at Les Gets in France, and top-15 efforts from Sam Blenkinsop (at Le Gets) and Brook Macdonald (at Maribor) – they were the exception rather than the rule.

However, there was plenty to smile about with the younger brigade led by Rotorua’s Lachie Stevens-McNab who grabbed a podium finish at the worlds in Val di Sole with teammates James Macdermid and Guy Johnston combining for three kiwis in the top eight.

Former international ski racer Jessica Blewitt, who only managed a short stint in Europe, came away with eighth at the Val di Sole worlds and 15th on the world cup from just two starts.

There was excitement from former junior world medallist Tuhoto-Ariki Pene, in his first full season in the elite rankings, finishing 36th overall led by an eye-catching 14th at the world championships.

There’s no doubting that Cooper made a significant breakthrough in 2021, highlighted with his breath-taking performance on sport’s biggest stage at the Tokyo Olympics. The records show his sixth placing in the cross-country was the best ever from a kiwi mountain biker. The manner of that performance was something else, riding in a select group with defending champion Nino Schurter and threatening the podium until the final half lap when the fuel started to splutter in his tank.

The excitement was not just the performance in front of 7000 fans at Japan’s spiritual home of cycling at Izu, but that the former junior and under-23 world champion showed he can foot it with the world’s best.

“It was the best season of my elite career so far. Of course, my results after that race were not what I had hoped for but I was rinsed after the Olympics,” said the Trek Factory professional.

“The World Cup has not really been a huge focus for me. This year it was Tokyo and I am so proud of my ride there. We nailed everything for that race.

“Next year the focus will be the Commonwealth Games. But I do feel I belong at the top of the sport and that I am confident I can win a World Cup.”

Cooper believes his team got their preparations bang-on and that the combination of accurate and honest two-way feedback coupled with his own growing input into his training is paying dividends.

The World Cup highlight was a podium at Leogang, Austria and eighth placing overall, helped with improving form in short track racing which ensured handy draws for the main races.

The 26-year-old was not on his own, with North Canterbury’s Ben Oliver flying solo without major team support, finishing the world champs with a top-20 in the short track and 29th from 93 starters in the main race. His performances played a significant part in New Zealand’s overall ranking to earn even a single quota spot for Tokyo.

The excitement in cross-country came with 2018 Commonwealth Games champion Sam Gaze, back from two years in an injury-hit wilderness. The Alpecin Fenix pro, who needed binoculars to see the front of the field from the rear of the grid, worked his way to 47th overall in the world cup rankings, with Oliver 68th – both from four of six races.

The highlight came at the Val de Sole worlds where Gaze was inspired, starting 87th on the 11th row to force his way past 40 riders in the tightest of start loops, to eventually climb to a remarkable sixth place.

There is no doubt that a fully-fit and motivated Gaze will make for a stronger kiwi assault on the world rankings in 2022.

Added to that was an enterprising 12th place by talented Canterbury rider Ethan Rose in the junior race at the world championships, after dominating the junior races in Australasia in recent seasons.

Whether climbing uphill or flying down, young New Zealand mountain bikers have provided plenty of highlights in another challenging year competing under covid restrictions.