Currie and Fisher-Black impress with strong showings in time trial

Currie and Fisher-Black impress with strong showings in time trial 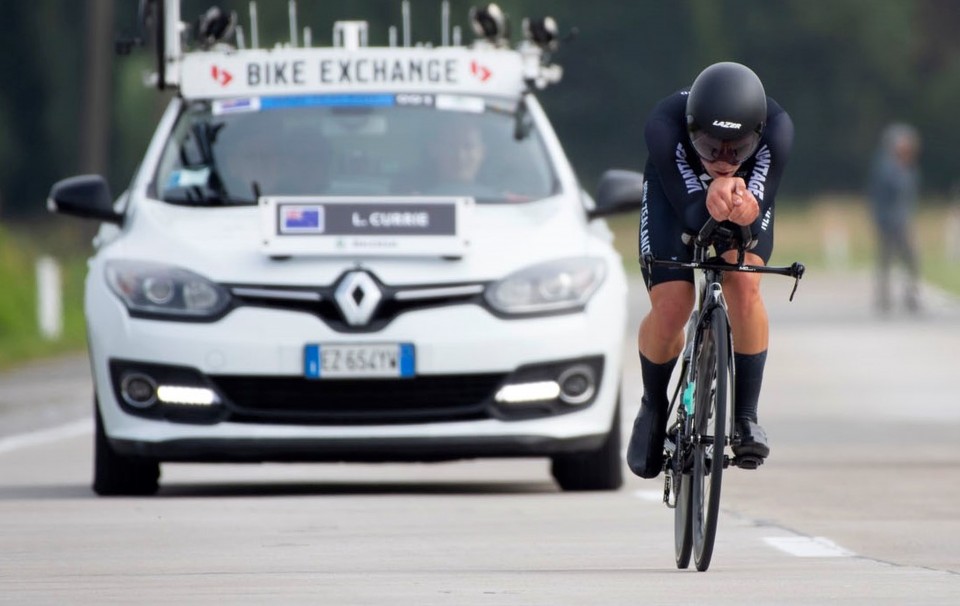 Vantage New Zealand riders Logan Currie and Finn Fisher-Black finished just outside the top-10 after strong performances in the under-23 men’s time trial on day two of the UCI Road Cycling World Championships in Belgium.

Currie was the second rider off, claiming the early lead until edged by American Magnus Sheffield, with the pair in the hot seats for an hour. They were joined by Australian Lucas Plapp who clocked a superb 34:39.99 which stood as the best time for the next 59 starters until he was pipped by the final rider, Denmark’s Johan Price Pejtersen.

The New Zealand rider has been in Europe for much of the season, part of an ambitious effort from the newly formed Black Spoke Pro Cycling Academy, the UCI continental Auckland-based team established by former international riders Scott and Vanessa Guyton. Their backer, kiwi businessman Murray Bolton, funded a racing campaign in Europe for the team that comprises gifted young New Zealand riders.

“The whole culture of Black Spoke is next level and it has been a really good experience,” said Currie. “I have really enjoyed being with the fellows. It has been a whole lot of fun - a lot more relaxing being here with good mates which takes pressure off mentally so you can just go ahead and prepare for racing.”

Currie was pleased with his performance today.

“It was probably the best I could do today. There’s more to offer in the coming years though. I rate today as an eight. I was pretty stoked with it.”

Fisher-Black, at 19 years one of the youngest in the field, came in with high expectations after his podium placing in a Pro Tour race nearby in the Baloise Belgium Tour mid-year. He was 10th in the junior time trial two years ago and was permitted to start in the elite-only race at last year’s covid-struck world championships in Italy.

“Finn rode well and you could not really fault his performance at all. He is probably showing signs of a long and hard year after his mid-season move to a WorldTour team which is a challenge for a young rider,” said Cycling New Zealand director sportif, Craig Geater.

Currie and Fisher-Black will look ahead to Friday’s 121km road race, where they will be joined in the Vantage New Zealand team by national under-23 champion Jack Drage, Reuben Thompson and Olympian Corbin Strong.

Thompson and Strong have both recently signed for WorldTour teams next year – Groupama FDJ and Israel Start-Up Nation respectively – while Drage is a trainee with Groupama-FDJ, with another rider with the famed French team, Laurence Pithie, forced to withdraw after fracturing his arm earlier this month.

“We have a good group of fellows here,” said Currie. “I’ve done a whole heap of racing in Belgium with Black Spoke so it is like home roads to me. I can’t wait to get in to it. We have a strong team that is capable of doing something special on the day.”

The Dutch domination of elite women’s cycling continued with Ellen van Dijk too strong on the flat course to win the time trial in 36:05 from last year’s runner-up Marlen Reusser, the Tokyo Olympic silver medallist.

Tomorrow’s attention turns to the Vantage junior men where national champion Lewis Bower (Auckland) and runner-up Jack Carswell (Cambridge) line-up in the time trial over 22.3km from Knokke-Heist to Bruges.