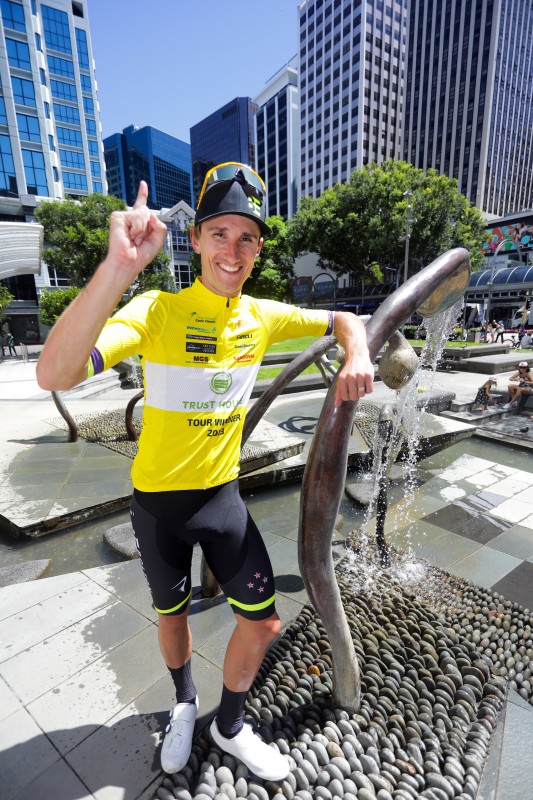 James Oram has claimed the 2023 UCI 2.2 New Zealand Cycle Classic title in front of a large crowd in central Wellington city this afternoon while Germany’s Lucas Carstensen took out the fifth and final stage in an exciting sprint finish.

Following five days of racing throughout Wairarapa and Wellington in the North Island of New Zealand, Oram won the general classification with 14h 05:32 only five seconds ahead of teammate Josh Burnett while Dutchman Adne van Engelen, from Thailand based Roojai Online Insurance, was third 11 seconds behind.

Oram, who has previously won stages on this tour before, thanked the large crowd that lined Wellington’s city streets and “Golden Mile” of Lambton Quay, before thanking this team.

“I’ve come up through the juniors and been so close a number of times, so it’s a dream come true … it shows that if you have the right people behind you, supporting you, things can happen,” said Oram.

“Everyone (in the team) just stepped up and being the only pro-continental team here, we knew we had to do it and it’s great to be able to pull it off. (To have) first three UCI stage wins for the season and UCI overall win in January is just perfect and the momentum we want to keep going for the rest of the season.

“(The crowd was) amazing, amazing. I got some family who came down to watch me race and then being able to support us because a lot of the times we are racing overseas in Europe ... to have friends and family out cheering your name is pretty cool.”

Black Spoke’s good day continued with Luke Mudgway claiming the sprint ace jersey and finishing second over the line behind Carstensen, who is from Hamburg in Germany but lives in Thailand with the Roojai based team.

Carstensen said the team’s goal was to win a stage here … and they achieved it on the last day.

“When I saw this stage, I already thought this was a good stage for me. The Kiwis and the Aussies they have a crit circuit, but we have it in Germany and I grew up on Crit racing and know how it works, so I am very happy to win.”

Today’s stage was a criterium race for 60 minutes plus three laps of the 1.6km circuit. While Theo Gilbertson (MITO Q) lead the first lap and tussled with Coupland’s Glen Hayden, teammate Ben Oliver and Mudgway for the sprints, it was Black Spoke who drove the peloton for much of the race. The other highlight of the race was the battle between Mudgway and NZ National team’s Kiaan Watts for the sprint jersey, with Mudgway taking it by a mere five points.

Consistent riding all week by Camden Feint (Oxford Edge) saw him rewarded with the U23 jersey and giving a big shout out to the team’s Christchurch supporters; while mountainbiker Oliver was happy to end is tour with the Most Aggressive Rider jersey.

NZ Cycle Race director Jorge Sandoval thanked the crowd for turning out in droves to support the final stage of the five-day Tour, thanked all sponsors and his team, as well as the Wellington City Council for helping to make the event take place in New Zealand’s Capital City.