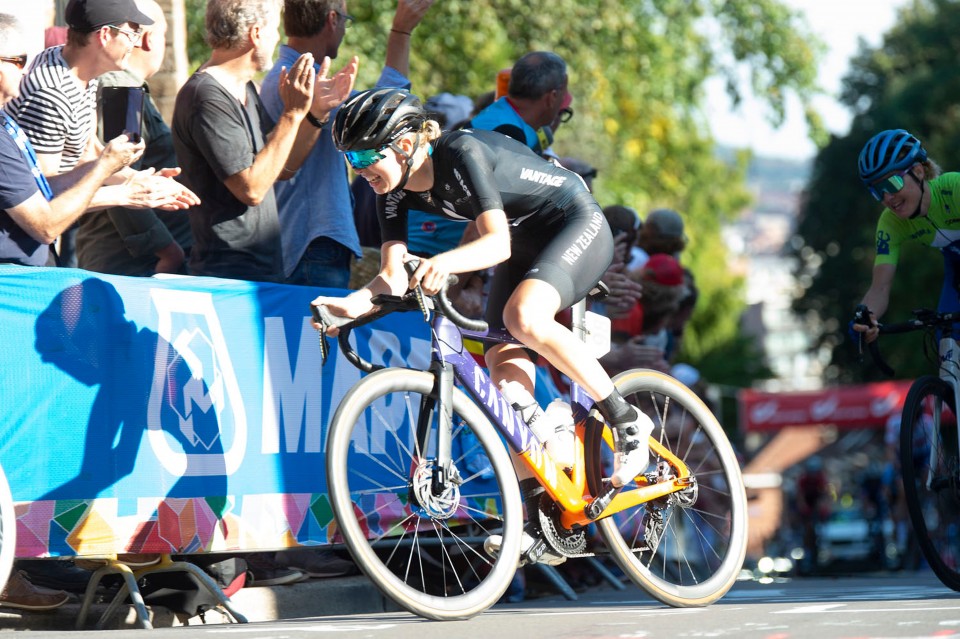 Harris, 23, led home the Vantage New Zealand riders in the 158km road race from Antwerp with circuits around Flanders, featuring a plethora of punchy climbs and cobbled surfaces, before the finishing loop in Leuven.

Vantage New Zealand teammates Michaela Drummond and Henrietta Christie, who both ride for the BePink professional team based in Italy, were in the front group over the early stages looking for opportunities to get into a break but the high pace negated any attacks.

That left the World Tour pair of Harris and Niamh Fisher-Black to position themselves at the pointy end of the peloton over the final two and a half laps of a testing circuit in Leuven.

Harris was able to maintain position in the front group as attack after attack launched over the final laps. She was caught on the wrong side of a split in the lead group on the penultimate climb with the kiwi coming home in the second pack 49 seconds behind the winner.

Young Italian rider Elisa Balsamo, a former junior world champion on the track and road, upset Dutch star Marianne Vos for the honours. She recently competed on the track at the Tokyo Olympics.

Drummond, in her first elite road world championship, came home in the third chase group 9:13 down on the winner in 64th place, with Fisher-Black a further 20 second back in 91st place. Such was the rigours of this course and the competition, that the New Zealand pair were in good company, finishing alongside multi world and Olympic champion Anna van der Breggen, leading Australian hope Amanda Spratt and Switzerland’s Marlen Reusser, the time trial silver medallist at the worlds and Tokyo Olympics.

“The plan was to keep it chilled for the first 50km as I didn’t want to use up too much energy on the stretch from Antwerp to the Leuven circuit but manage a good position for Henrietta and Michaela to get in moves if there were any sizeable groups.

“The entry onto the circuit in Leuven is very nasty with a 200m decent at nine percent into a 110 degree turn and then straight uphill for 500m. It was a rude awakening but so important to get into a good position.

“I had done all the hard work and was hanging on so I was a bit gutted to miss that final split with 5km to go. It was literally two wheels in front of me, someone dropped the wheel to the front group and that was all it took. We were close to going over the crest of the hill which was disappointing but overall, I was pleased.”

Harris is a reserve for next weeks famed Paris Roubaix one-day race before the Women’s Tour of Britain in two weeks which wraps up her season before heading home for summer.

The championships conclude tomorrow with the elite men’s race over 268kms from Antwerp to Leuven with a total of 2500m of elevation gain, featuring a seemingly never-ending number of short, punchy climbs around circuit in Flanders.