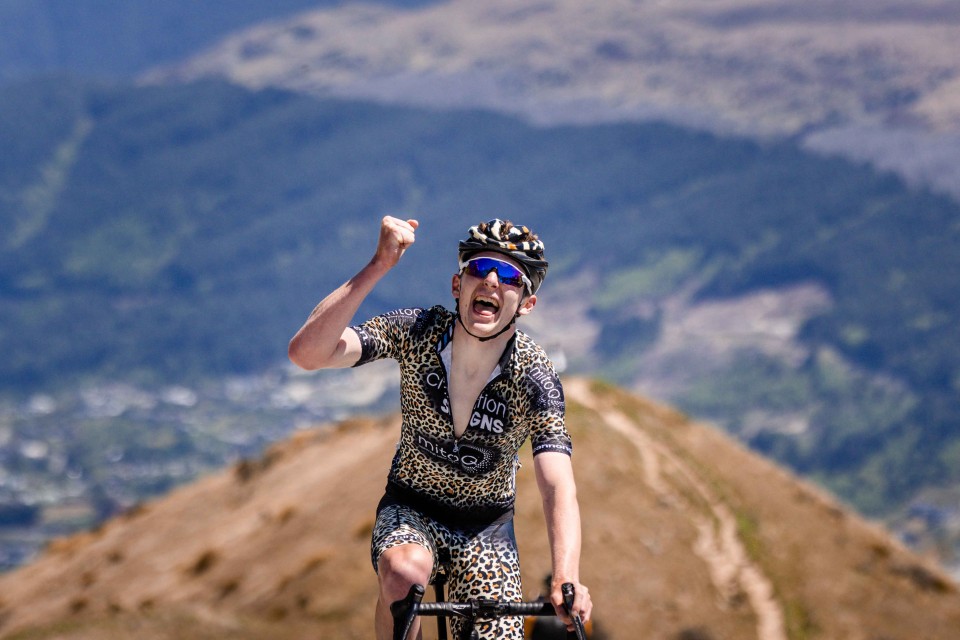 A spectacular climb by outstanding young Southland prospect, Josh Burnett lit up stage four of the SBS Bank Tour of Southland as Michael Vink tightened his hold on the yellow jersey at the midway stage of this year’s race.

Burnett (Creation Signs-MitoQ) has made a mark across most cycling disciplines, as a notable BMX rider, a national under-23 mountain bike champion and the current national cyclocross champion.

He has been following his home tour since he was five years old but even during a practice ride of the Remarkables a couple of weeks ago, he never dreamed he could win a stage on debut.

In fact, it was only when he finally crossed the finish line after a grueling 6km climb up the Remarkables at the end of a 101km stage from Mossburn that he was able to start taking it all in.

“The whole race is so special to people from Southland, I just can’t quite believe that I’ve done it,” the 21-year-old said.

“My parents have been helping out with this race since I was five years old and when you go to an Invercargill primary school you know all about the Tour of Southland. Coming around the corner I knew I couldn’t take a guy as classy as Vink to the corner so I just had to go for it and I managed to hold on.”

A national cyclocross and under 23 mountain bike champion, Burnett was able to ride away from Vink (Transport Engineering Southland-Talley’s), who would finish second on the stage, and Max Meffan (BJ Carter Builders and Insulators) who was third.

Earlier in the stage a breakaway of 19 riders kept the peloton on task but was too widely represented to be given much freedom.

When they were captured in the shadows of Queenstown’s breathtaking Remarkables mountain range, only a small group emerged to challenge for the stage, with Burnett making his move at the midway point and holding his nerve to the finish.

Looking to claim a third Southland crown in the space of four years, Vink’s disappointment at missing out on a stage win was tempered by the fact he was able to take significant time out of all his main rivals.

“It’s such a tough climb - the stage is quite short but it’s a hard run through the Devil’s Staircase and then a steep climb to the finish. It’s a stage where you can’t really hide and it’s usually won by the best guy and the best guy won today,” he said.

“It would have been really nice to finish off with a stage win for the boys but you’ve got to think bigger picture. I’ve got good legs, which is the key thing. Josh was better, but in terms of the GC we are still on track.”

Vink now leads by 1min 43sec over Ollie Jones (PowerNet), with Bailey O’Donnell (Oxford Edge) climbing up to third place overall at 2min 19sec and the lead in the under 23 classification.

“I think based on my first day’s effort I had no friends after that,” Vink said.

“Often when you’ve got a big lead or you show your cards early it can go against you a wee bit and everyone works against you. You expect that and you’ve got to take it as a compliment, it’s the right thing to do and the race is on, it’s exciting and that’s good.”

George Jackson (Creation Signs-MitoQ) was rewarded for a strong week so far with the Sprint Ace jersey, while James Fouche (Bolton Equities Black Spoke Pro Cycling) has a slim lead in the King of the Mountains standings.

Southland’s Josh Haggerty (PowerNet) had a good day in the break and was named Most Combative for the stage.

Things don’t get any easier on stage five, with a 154km trip from Invercargill finishing with the storied Bluff Hill climb.

“Bluff tends to be the hardest stage on the tour depending on the weather,” Vink said.

“It’s important that the team and I recover well and be ready for anything.”