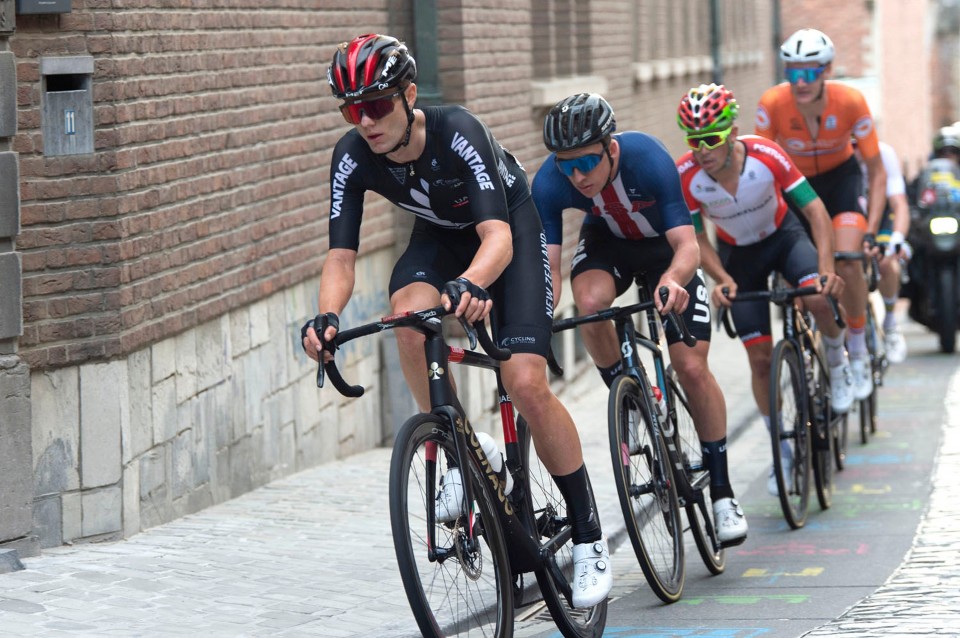 Tokyo Olympian Corbin Strong battled through a brutal and crash-ridden 161km race to claim a top-20 finish in the peloton of the men’s under-23 road race at the UCI Road Cycling World Championships in Belgium.

The Vantage New Zealand riders were animated in a display of equal parts courage and cleverness in the gruelling race with 20 climbs on a mix of circuits from Antwerp to Leuven.

Italian Filippo Baroncini edged off the front as the peloton, including Strong, mopped up the break on the final climb, but not before both Logan Currie and Finn Fisher-Black made bold moves at the front of the race.

Canterbury’s Currie, who is racing in Europe with the Black Spoke Pro cycling team, took his chances to get into an early break, avoiding the swag of crashes that produced mayhem behind, and accounted for under-23 national champion Jack Drage who broke his bike frame in acrashl to bring an early finish to his race.

Meanwhile Currie pushed to the lead with a select group, opening a four-minute lead in the loops around the Flanders circuit, until a puncture and then sent the wrong way by officials, saw him back in the pack with 60km remaining.

National under-23 time trial champion Fisher-Black took up the challenge as the race moved back to the circuit around Leuven, pushing into an eight-strong break that opened a one-minute advantage. However, he could not go with the final acceleration on the toughest climb with just over a lap remaining, leaving Strong to hold on to the bunch who reeled in the leaders with the finish insight.

Baroncini made the attack and held on to win with Strong in the 32-rider peloton that finished just two seconds back.

Reuben Thompson, who moves to the WorldTour with his Groupama-FDJ team, was 2:28 back in 54th, Fisher-Black, already with his new WorldTour team UAE Team Emirates, rolled home 7.28 back in 85th with Currie, so courageous today, a further two minutes behind.

Director Sportif, Craig Geater was thrilled with the effort of the Vantage New Zealand team.

“They rode as we had planned and were always prominent. We did not get a race win but that black jersey was at the front of the race for most of the day,” said Geater.

“They stuck to the plan, to get riders like Logan away in any early breaks, and he was just unlucky with the puncture as he looked quite comfortable. Finn took up the challenge and rode so well, while Reuben and then Corbin dug in and gave it plenty. It was a really impressive effort.”

Strong, the current points race world champion on the track, arrived in Europe last month after competing with the track team at the Tokyo Olympics.

“I was there at the finish but didn’t quite have the legs to produce something special but overall, as a team we rode well and put ourselves in a position to be up there in the medals. The boys can be really proud of how we rode,” said Strong.

“To be honest I think it was my track legs that outdone me in the end. Unfortunately, I had track legs in that last lap and not the road endurance legs I needed to finish it off.

“But I take a lot of confidence out of getting a top-20. I am not in my best road shape but a few more months on the road and I think I can be really competitive in this sort of field,” said Strong moves to WorldTour team Israel Start-Up Nation next year.

Earlier Canterbury’s Mitchel Fitzsimons and Auckland’s Jack Bower were 50th and 53rd respectively while Waikato’s Jack Carswell did not finish the junior men’s race over 121kms.

Tomorrow is the turn of the Vantage New Zealand elite women led by Niamh Fisher-Black, currently the No 1 ranked in the young rider category on the Women’s World Tour. The SD Worx Team cyclist is joined by fellow World Tour riders Ella Harris (Canyon SRAM), Mikayla Drummond and Henrietta Christie (both BePink).

The race over 158kms from Antwerp to Leuven comprises circuits in the Flanders and Leuven regions, starting at 10.20pm NZ Time and broadcast live on Sky Sport.

CAPTION: Action of Vantage New Zealand under 23 riders with Corbin Strong in the peloton, Logan Currie during his stint in the lead, and Finn Fisher-Black at the UCI Road Cycling Championships in Belgium. (Photo Credit: Casey B Gibson).