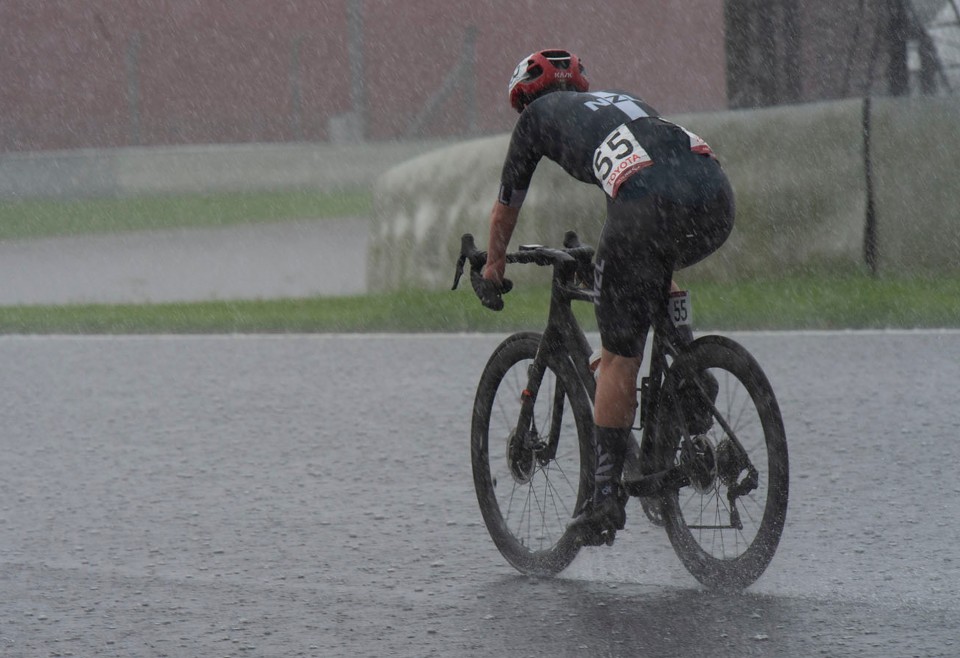 Precise preparations in the heat chamber to manage the extreme heat and humidity in Japan was washed away by heavy rain and coolish conditions for cycling’s road racing at the Tokyo Paralympics.

There was continual and persistent rain with fog throughout the day to make conditions unpleasant and tricky in and around the Fuji International Speedway for the penultimate day of competition.

The kiwi contingent fought strongly in the inclement conditions with Otorohanga’s Nicole Murray fighting back to finish sixth in the women’s C4-5 road race over 80kms, while ebullient Taranaki trike rider Stephen Hills was also sixth in the T1-2 men’s race over 26.4kms.

“It was a tough, tough day for sure. It was around 19C degrees which is not cold in New Zealand terms, but when we have been at mid-30s and above then the driving rain and cool conditions made for a real test,” said Cycling New Zealand head coach Stu MacDonald.

Murray, who lost her left hand in an accident as a child, took on her least-favoured discipline in a field that included Para cycling’s most distinguished rider in Great Britain’s Sarah Storey, who won her 18th gold medal.

With Germany’s Kerstin Brachtendorf opening up a minute advantage after three of the six laps, Murray managed to hang on to a five-strong group led by Storey and compatriot Crystal Lane-Wright.

“Nicole was brilliant today. The conditions were shocking and the road race is not the event that she has put much emphasis on leading into the Paralympics,” said MacDonald. “Additionally, this was a tough and technical course, especially the punchy climbs and tight corners on the section outside of the motor race circuit.

“There were times when Nicole dropped back on the technical stuff, but she showed so much determination to fight her way back on the hills. It was a fantastic ride.”

Murray hung in until the penultimate lap when Story made her move and caught the German before going on to win in 2:21.51 just ahead of Lane-Wright with Murray a gallant sixth 3:30 behind the winner.

Hills, 39, who suffers from right side impaired muscle-power after he was hit by a motor bike as a young child while crossing a road.

The four-time world championship medallist couldn’t match the speed on the leading trio in the technical parts of the circuit, made more challenging with the wet conditions, to fall over a minute behind in the first of two laps in the 26.4km race. He fought hard to push up to sixth on the second lap, three minutes behind winner, double-world champion Jianxin Chen of China.

“Stevo was really up for a big race today. The leaders made a fast start and he could not go with them, and from that point he rode his own race really consistently, and managed the conditions well.”

Earlier Cambridge rider Eltje Malzbender, who was fifth in the time trial earlier in the week, withdrew from the T1-2 road race with the team management deciding it was potentially too dangerous.

“Her cognitive function affects her ability to remember the course as well as the key danger points without receiving immediate instruction. Her ataxia would have affected her severely if the onset was during the race, especially if she was solo on the course with no-one to assist her.

“In the time trial we were allowed a follow-rider behind her to give her basic directions, and at world championship courses for athletes with this disability are smaller and we can position staff at all the key points to give her directions.

“But this is a 13km circuit that is technical and much of the lap was outside the Fuji circuit and she was not allowed to be accompanied. We believed the safest thing to do, especially in these conditions, was for her to withdraw after the start. It’s a shame but athlete safety is paramount and we did not want to take the risk.”

CAPTION: Waikato’s Nicole Murray in the midst of the heaviest of the rain and Taranaki’s Stephen Hills during the Tokyo Paralympic road races at Fuji International Speedway circuit.  (Credit: Casey B Gibson/Cycling New Zealand)