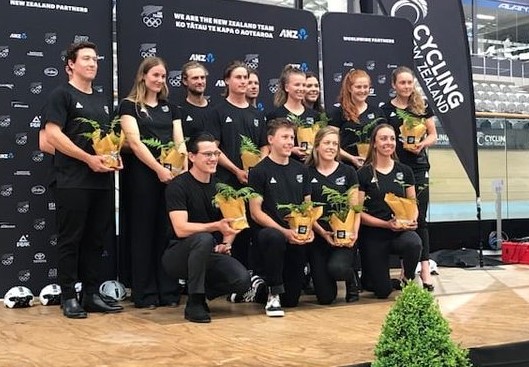 The athletes were named to the New Zealand Team at a function at the Avantidrome in Cambridge this morning.

Six riders return from the team that competed at the Rio Olympic Games and four cyclists will compete in their third Olympic Games following their debuts at London 2012 – Aaron Gate, Ethan Mitchell, Rushlee Buchanan and Jaime Nielsen. Eight riders will be making their Olympic debuts.

Callum Saunders (sprint) and Nick Kergozou (endurance) have been selected as travelling reserves.

Jordan Castle, Tom Sexton, Michaela Drummond, Nicole Shields, Emily Shearman and Ally Wollaston have been named as non-travelling reserves with one of the female riders to be selected as a travelling reserve next year.

The team’s strength lies in endurance events where the men’s team pursuit is ranked second in the world, the women third, Campbell Stewart ranked third in the omnium and New Zealand men ranked second in the two-rider Madison which was added back into the Olympic programme for Tokyo. In the sprint events Ellesse Andrews, whose father Jon competed in the 1992 Olympics as a sprint cyclist, is ranked fifth in the world in the keirin. The men’s team sprint is ranked eighth.

“It is exciting to finally get the team named which is a big step towards the reality that we are on track for the Olympics to go ahead which is something we have been banking on. Despite all the stuff going on in the world, we can continue with our plan for the Olympics, put all our hard work to good use and put our best foot forward.”

“This year has obviously presented many challenges for everyone, but I can confidently say that the women’s team is stronger mentally and physically because of it. I’m actually more excited now with an extra year because of the support we were given

“Cycling New Zealand helped us get through the lockdowns and while the postponement of the Olympics was a big change, it was realistic with Covid-19. I personally was able to train at full capacity and so another year was a benefit for me and the team and we have definitely used that extra time wisely.

“To be named in my third Olympics is a huge honour and I am determined to use the knowledge I have gained from my previous experiences to help my team. The New Zealand Team is such a unique and special team to be part of and I will always be immensely proud to wear the fern.”

“We’re on a new path to Tokyo and it’s fantastic to be naming our track cycling team as we move forward with purpose.

“A huge amount of work has gone into getting you to this point; there’s a lot more work to do between now and Games time so we wish you the best with the rest of your preparation and we can't wait to watch you compete and earn the fern.”

“The endurance squads have come off an outstanding 2019 season and through to early 2020 with some exciting young talent emerging with our established riders. Both squads produced world class performances and have used the opportunity with the postponement to 2021 to focus on an extensive strength and conditioning training block without compromise for international competition.

“The sprint group are in a rebuilding phase and this year has allowed us to bring on some young talent to merge with our proven performers.

“While the world is in some turmoil, our riders have been single-mindedly focussed on making the most of every session for their sights firmly fixed on Tokyo.”

Cycling New Zealand said that with no global track cycling events on the international schedule for the next five months, the decision to name the team now was in the best interests of the riders.

The sport’s world body, the UCI is to make significant change to the global track cycling programme, with the World Championships moving to late in the year starting from 2021.

“We looked at all of the options and shared them with our stakeholders, coaches and athletes. With no major international competition before the 2021 Games, the consensus was that it was unfair on riders to wait until early next year to receive a decision that can be made now,” said Barras.

“At the time of the Games postponement, all track cycling qualifications and New Zealand team selection races under the previous nomination criteria had been completed. With no further significant international events to come, it made no sense to delay the selection.

“We had buy-in from the UCI, NZOC, riders and coaches to move forward with the selection process now so our selected riders can focus positively on their preparations and we can work with our other riders on their future plans.”

Barras said they have included additional reserve riders to cover the risk of injury with such significant lead time to Tokyo next year.