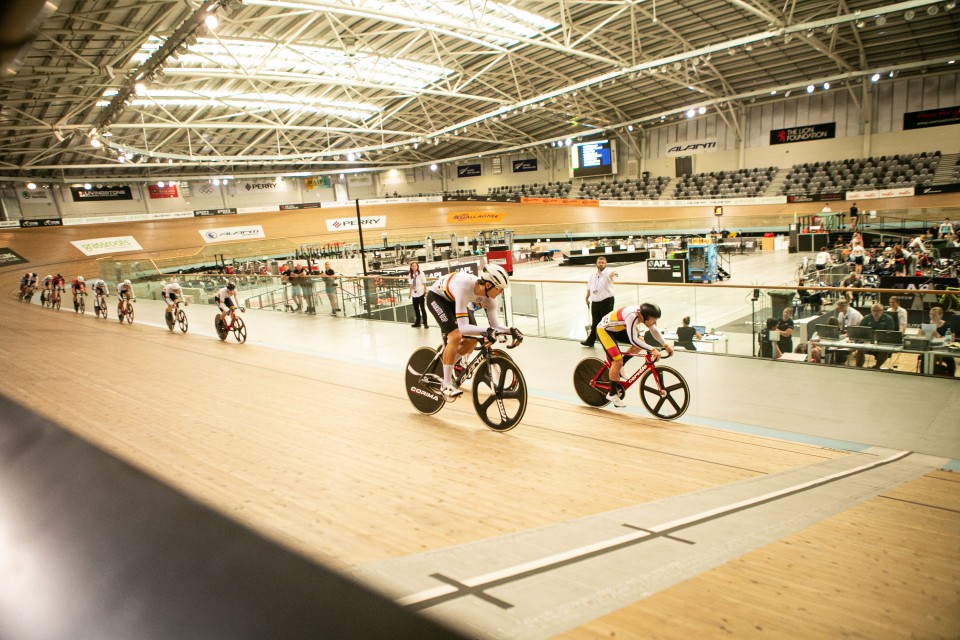 Top qualifiers and Tokyo Olympians Ellesse Andrews and Sam Webster proved the queen and king of speed on the second day of the Cambridge 3 Day Carnival at the Avantidrome in Cambridge.

Andrews, who set a personal best in qualifying, dominated fellow Waikato BOP rider Olivia King in the semifinal in two straight rides but had to fight off the strong challenge from fellow Vantage Elite Team rider Shaane Fulton (Tasman) in a third deciding ride in the final.

“I’ve loved getting back in the race-day mindset and putting all the work from training into play. It’s a good opportunity to test myself and gauge where I am at physically with some hard and fast racing,” said Andrews.

“Being back racing after a block of no events due to Covid has been great,” said Andrews. “The more we are all exposed to quality sprint racing, the better for personal and squad development, alongside growth of women’s sprinting as a whole too.”

Webster, who went within 0.007s of his national record in qualifying, accounted for former BMX rider Jayden Fleming in the quarter finals and the well-performed Southland rider Bradly Knipe in the semifinals, both in two straight rides. The Commonwealth Games sprint gold medallist showed his class to claim the title over fellow Olympic teammate Sam Dakin (Auckland) 2-0 in the final.

“It was good to hold this over two days and get the mindset around qualifying and then coming back the next day for racing as the sprint competition is over three days in Tokyo,” said Webster. “Backing up each day is important and it was good to see five riders under 10 seconds in qualifying.”

The Vantage National Championship focus was on the under-19 riders who competed over the four-discipline omnium where brilliant young Canterbury rider Jenna Borthwick continued her outstanding performances. After winning five individual titles at the national championships pre-covid, Borthwick recently won the Vantage National Criterium title.

While the pandemic cost her any chance of competing at the 2020 Junior World Championships, Borthwick impressed with a win in the scratch race, second in the tempo, and wins in the elimination race and the final points race. She finished on 146 points ahead of her fellow Canterbury riders Amelia Sykes and Charlotte Spurway, with the trio finishing top three in all four races.

“I felt quite confident coming in here and that my legs were feeling pretty good for racing. And it was good to be back competing on the track,” said Borthwick.

“We do lots of racing against each other and that helps all of us to improve we have different coaches, but we get to race each other regularly in Canterbury which really improves us all.”

Waikato Bay of Plenty Hub rider Zakk Patterson took out the male under-19 omnium in a tight battle over Auckland’s Joel Douglas and Southland’s Mitchel Fitzsimons.

In Under-17 racing Auckland’s Nate Boness claimed wins in the scratch race and Elimination, while Waikato BOP’s Seanna Gray won the scratch, tempo and elimination races.