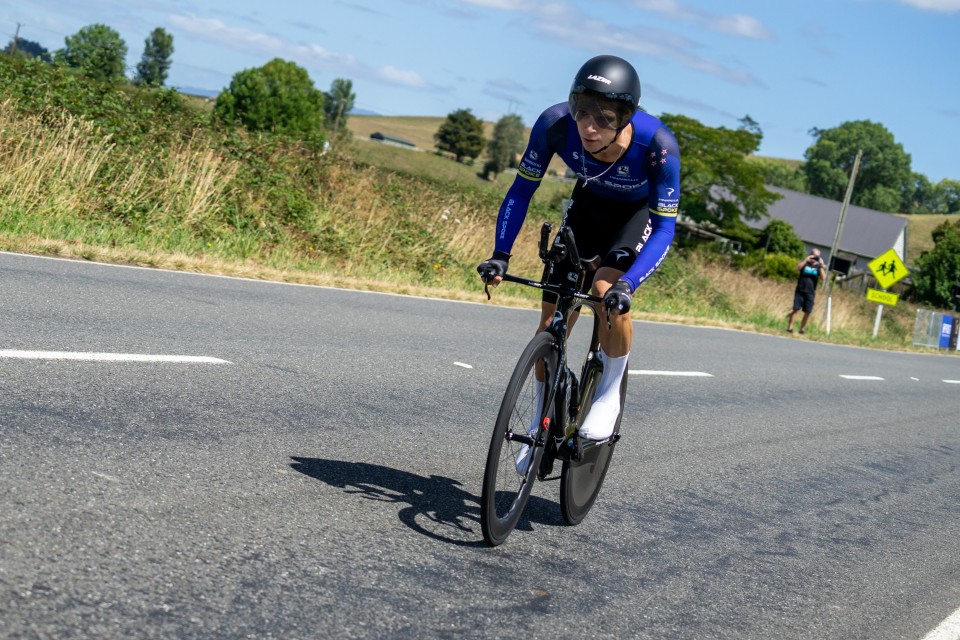 The golden summer for New Zealand cyclist Aaron Gate continued with the narrowest of victories in the time trial at the Vantage Elite Road National Championships in Cambridge.

Gate, a key part of the track team for the Tokyo Olympics, edged WorldTour rider George Bennett by 0.7s over the 44km test on the first day of the championship that form part of the RIDE Cycling Festival.

The 2015 champion Michael Vink (St George Continental-Canterbury) was a further second back in a tightly fought individual test, although the elite trio had to give way to 20-year-old Finn Fisher-Black (Tasman) who won the under-23 honours in 54:07.54 which was nine seconds faster that Gate.

“Something has always got in the way of the time trial. I wanted to give it a crack last year but my coaches decided it was too close to the track world champs. It was 2009 since I last rode it so this makes it all the more special,” said Gate.

“I wanted to go out hard and knew time would be made up on those tough climbs and into the head wind. I broke it down into segments, and went as hard as I could in the first part. I paid the price a bit on the way back but the tailwind kicked in to keep my speed up over 50kph even when I was hurting.

“It is a good confidence-booster for Sunday’s road race. A couple of our Black Spoke boys did well to be second and third in the under-23s and puts us in good stead as a team for Sunday. It’s great to get a national jersey for Black Spoke.”

The win follows on from Gate’s victory in the Tour of Southland and the Vantage Elite Criterium National Championships.

Gate had a 20 second advantage on Bennett with a further two seconds to defending champion Hamish Bond at 14kms but with nine kms remaining the advantage was just three seconds. He clung on to win in 54:16.76 with Bennett having to settle for runner-up for a second straight year just 0.74s behind with Vink 0.9 seconds back in third and Bond fourth.

Fisher-Black, who won the under-23 time trial and road race last year, sealed the first of his double-double in emphatic fashion to win the under-23 honours by over a minute from the Black Spoke Pro Cycling pair of Logan Currie and Dylan McCullough.

He heads to Europe on Monday where he will join the Jumbo-Visma Development team in a training camp in Valencia.

“I am scheduled to race on March 9 and pretty excited about what is ahead. There is George and myself for Sunday’s race. It is a good course, may be not as hilly as last year, but still with some good opportunities and some options to play with and George is on form.”

Like Gate, Williams hammered the first half of the lumpy figure-eight course near Leamington, opening a gap of over 30 seconds at the mid-way point and had more than enough petrol in the tank to claim her third time trial title.

“I am pretty happy with that. I was pretty committed to remain in Europe for the winter but I had a last-minute escape and such a good decision to come home for the summer. I am so lucky.

It is always a rushed build-up for nationals given my team focus is later in the year. It gives me some confidence for the road race. I am going to be heavily marked which is going to be hard but I just have to be stronger and smarter.”

Auckland’s Lewis Bower, runner-up in the under-17 Vantage Age Group Road Nationals Road Race last year, claimed the under-19 time trial honours ahead of his Fruzio ILABB teammate Jack Carswell (Waikato BOP) who had his chances dented when he dropped a chain on the climb.

Henrietta Christie (Velo Project) dominated the women’s under-23 time trial winning by more than two minutes, while Amelia Sykes, in her first year in the age-group, produced an outstanding ride to claim the women’s under-19 honours from the Velo Project pair of Prue Fowler and Jenna Borthwick.

The attention turns to the road racing with the under-19 race on Saturday afternoon, while the women’s and men’s elite and under-23 road races are on Sunday from 8am, with loops around the French Pass-Te Miro circuit with the start finish at Tom Voyle Park in Cambridge.