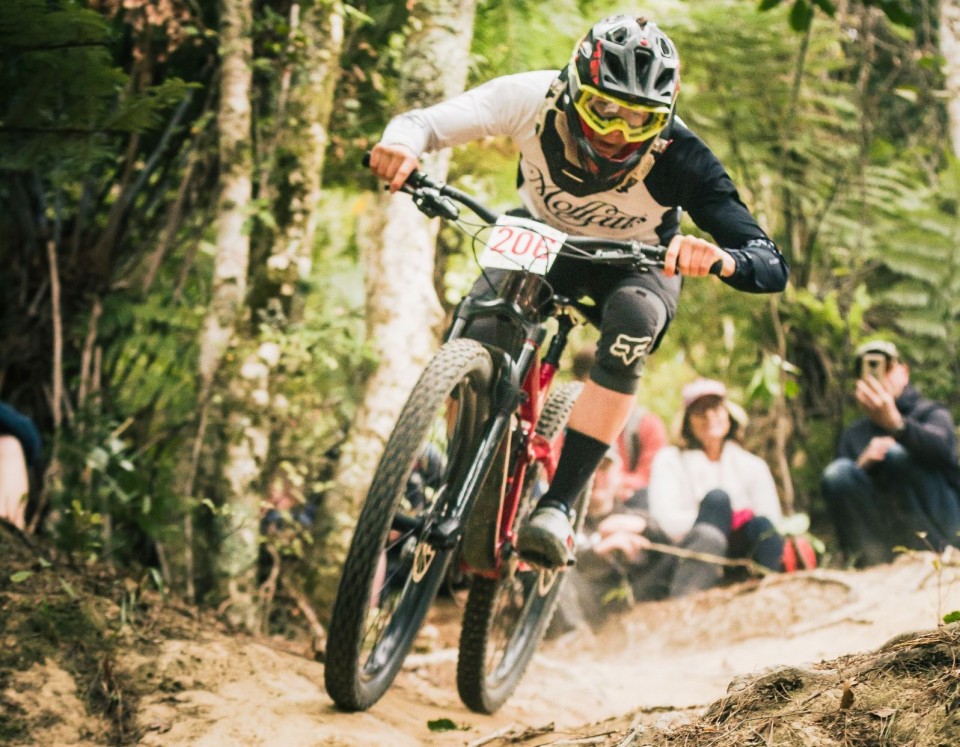 Hastings, from John Paul College, still an under-17 rider, won both the downhill at Upper Hutt on Friday, and the enduro on Sunday at Wainuiomata.

Rose, a super-talented under-20 rider from Darfield High School, was fastest in the downhill, second to talented North Canterbury rider Jacob Turner in a photo finish in the cross-country, and victorious in the enduro.

“It went pretty well over the weekend,” said Hastings. “Both the downhill and enduro were heavily peddly and I tried to push through it and keep going. I loved all the roots in the enduro which was a lot like at home in Rotorua.”

After the coronavirus-hit year, Hasting is looking forward to a heavy schedule of racing over the summer.

Riders enjoyed a track in excellent condition at Maidstone Park in Upper Hutt for the downhill with the 1.1km grade five course requiring more pedalling than most downhill tracks.

That suited Rose, the national under-19 cross-country champion, who took five seconds off his seeding run to clock the fastest time of 1m57.24s.

“I knew I had some left in the tank from the seeding run so I’m pretty happy with the result. It’s good to get points on the board early for the school.”

Rose was a second faster than Rotorua’s Cameron Beck (John Paul College) and Turner from Rangiora High School in the boys.

Hastings clocked 2m14.42s to be fastest in the girls, half a second clear of fellow under-17 rider Rebecca Hufflett (Nelson College) with top under-20 rider, Jess Blewitt in third.

Riders faced windy conditions at the Waiu Trail Park in Wainuiomata for the cross-country, at the facility run by Wainuiomata Trails Trust and comprises more than 45 hand-built tracks set in the regenerating native bush and wetlands.

There was a real rivalry between Turner and Rose, with the two riders clearing out from the field and remaining locked together going into the final corner.

Turner, who has been competing in local cyclo-cross racing amid reduced mountain bike events, helped give him the edge in the sprint finish, with both riders given the same time.

“It was a pretty tough race so the key was to get into the final corner first. It’s been a tough few months with the impact on events through Covid-19 but have been racing locally which has been great.”

It was a special win for Finn MacKenzie in the Under-15 boys, reaching out to his fellow Marlborough Boys High School teammate who missed the event after he was involved in a serious accident last week.

The U20 Girls champion, Amelie MacKay benefitted from a joint start with the under-17 field as she was able to hold onto to the main group for the first few laps. Mia Cameron (Taupo Nui-a-tia) took out the win in the younger grade with a pre-race favourite Hufflett taken out in a crash.

“That was a pretty epic race,” said McKay. “Shout out to those Under-17s - Mia (Cameron), Annabel (Bligh) and Rebecca (Hufflett) who were insane.  I managed to stay with them for the two laps but it was a mission.”

The afternoon saw the Team Relay event, with strong participation across all grades. Cashmere High School from Christchurch dominating the results.

The three-day competition concluded with the three-event enduro at Waiu Trail Park, which attracted 450 riders.

Under-15 rider Erice Van-Leuven (Raphael House Wellington) was fastest girl in the morning event, with a total time of 17m10sm while Luke Wayman (St Bede’s College) was best of the Under-15 boys in 16m05s only one second ahead of Jack Collins, an under-14 rider from Cashmere High School.

The senior riders came out to play in the afternoon with Hastings dominant in the girls with a combined time of 16m13s, while Rose was fastest boy in 14m52s.