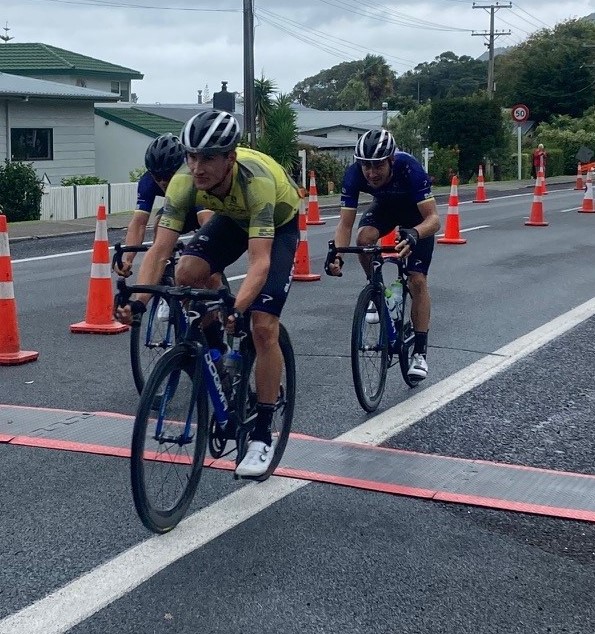 It was almost the race that never was. Twice postponed because of Covid, it looked like the weather gods were going to prevail with forecasts of strong winds and lashing rain. But the worst of the inclement weather did not hit the Coromandel, allowing the event to run, and produced some remarkable record performances. Organisers made provisions – with no marquee and stage scaffolding, no major prizegiving function – in case the weather turned with riders encouraged to ride to the conditions.

The day turned out to be nothing short of a triumph. The 192km course record of five hours was well and truly broken by not just one but 12 elite riders; the cut-off was avoided by the slowest rider by an hour, the attrition rate of just 6 percent was little higher than usual, and the worst injury of the day – a broken collar bone – was inflicted on the woman who has just broken the record for a New Zealand end-to-end ride, and said she wouldn’t have missed the race for anything.

Most astonishingly, perhaps, the K2’s first ever handcyclist, Jonno Nelson, who was born with spina bifida, completed the course in 10.37.05; a record unlikely to be beaten (except perhaps by him).

The strongest K2 elite men’s field for 15 years, including the 11-strong Black Spoke Pro Cycling team were not expected to threaten Michael Torckler’s course record of 5.00.48 but this elite field had other ideas.

Just before the Coroglen Tavern only 20km into the race, James Oram (Auckland), under-23 rider Logan Currie (Christchurch) and Hayden McCormick (Te Awamutu), all from Black Spoke, made a break on the flat, and the field unwittingly let them go, never to see them again.

The trio gradually extended their lead to around four minutes with McCormick summiting all seven of the King of Mountain hills in first place. The leaders reached Tairua together and their sprint came in the last 200 metres, with Oram winning by a metre from Currie and McCormick, with the winning time of 4:52:08 a full eight minutes under the old record.

Meanwhile, the rest of the field of K2 riders had made their way at four-minute intervals onto the 192km course, taking them through Whitianga, Coromandel, Thames and back to Tairua. They faced showers and plenty of wind, although the heavy rain stayed away until well after lunchtime.

A leading group of eight were still together on the final climb, the 420m Kopu-Hikuai Hill, the highest on the course. By the top there were just three, Cameron Wynniatt (Tauranga), Michael Jones (Thames) and Craig Burke (Manakau), all seasoned K2 riders of many years. It came down to the sprint again with Wynniatt prevailing in 5.41.30, with Burke claiming the King of the Mountains.

The 106km Tineli K1 started this year in Coromandel, finishing in Tairua. This event often attracts some of the country’s youngest talent and this year was no exception with Auckland brothers Ewart (19) and Lewis Bower (16) battling out another sprint finish with Jack Gilligham of Tauranga (16). Ewart won in 2:52:40.

The third race of the day, the 53k Nicholas Browne Challenge (NBC), starting in Thames, included the Under 17 Cycling NZ National Road Series and this group were the first to finish in Tairua. Elliot Robertson sprinted to a fine win in a time of 1:34:47, one second ahead of Finn Wilson (Auckland) and Carter Guichard (Wanaka).

Joshua Rowe, 14, (Cambridge) won the men’s NBC non-elite race in 1.40.44, just half a minute ahead of 13-year-old Harry Shannon. Daughter Caoilinn Gray (13) and mother Erin first and second in the women’s event.