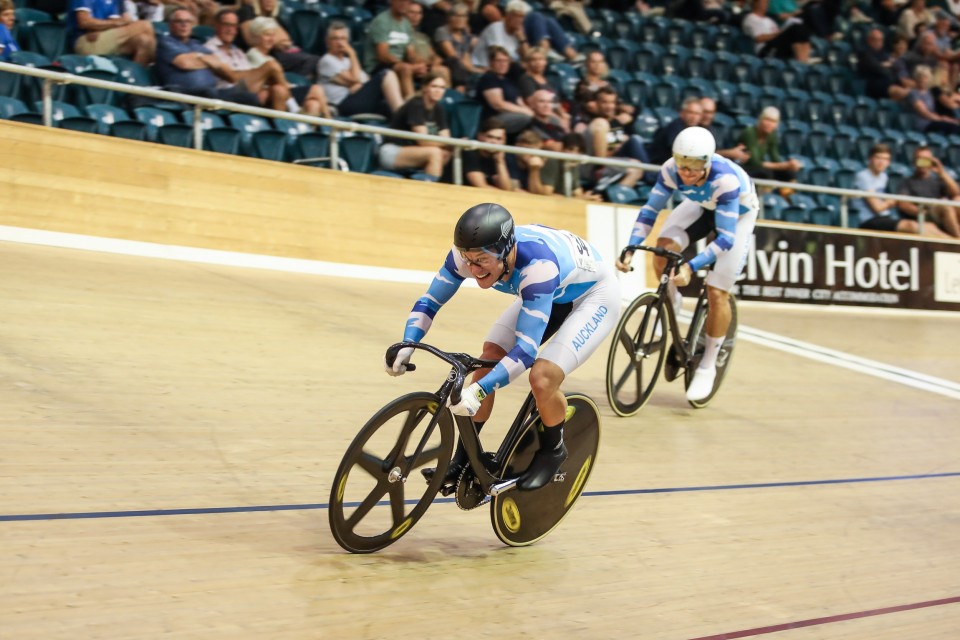 Two titans of New Zealand sprint cycling went head-to-head to highlight action on the second night of the Vantage Elite and Under 19 Track Nationals at Invercargill the SIT Zero Fees Velodrome.

Ethan Mitchell and Sam Webster both defied a high-pressure system in the morning to record flying 200m times never seen in Invercargill before at SIT Zero Fees Velodrome. Mitchell set a new championship record of 9.763secwith Webster only a fraction behind him in 9.796sec.

A demanding match-sprint series ended with the experienced Auckland firm battling it out and Webster winning the men’s elite sprint title over two rides, with Auckland’s Sam Dakin just edging out Southland’s Bradly Knipe in a deciding ride for bronze.

“It’s never easy, especially with the depth that we have in New Zealand now,’ Webster said.

“We all had a pretty tough run from the quarterfinals today and that’s probably something we haven’t had since the days of Eddie Dawkins, Simon van Velthooven, Matt Archibald and Ben Stewart.

“We had really incredible depth back then and it’s exciting to feel like we’ve superseded that. We are at a really strong point and I feel like the sprint culture is really growing in New Zealand.”

Webster and Mitchell first rode together as schoolboys on the Manukau velodrome and have scaled the international heights at world championships and Olympic Games, ensuring any individual match-up will be an enthralling one.

“It’s pretty hard because we both know each other’s strengths and we also overlap in a lot of areas. Sometimes the dumbest moves that you fully commit to are the ones that catch the other guy by surprise.”

Waikato-Bay of Plenty’s Bryony Botha claimed the elite women’s 3000m individual pursuit, taking the gold medal final in a fraction outside the championship record from teammate Jaime Nielsen, with Southland’s Kirstie James winning the bronze medal ride-off. All three are in the endurance squad to compete in the Tokyo Olympics.

Canterbury’s Amelia Sykes backed up from her 500m time trial title on the opening night to storm her way to victory in the under-19 women’s 2000m individual pursuit, smashing the New Zealand record in the process with a time of 2:20.044.

“I had a plan and I just went with it and it was awesome,” Sykes said.

Borthwick showcased her allround abilities and a withering finish on the way to winning the under-19 keirin from Waikato-Bay of Plenty’s Lily Cawood and Southlander Ciara Kelly.

Waikato/Bay of Plenty’s Prudence Fowler and Canterbury’s Charlotte Spurway dominated the under-19 women’s 15km points race, taking a lap on the field and then motoring away again. Fowler underlined her performance by winning the final sprint for gold, with Spurway second and Southland’s Rhylee Akeroyd third.

Auckland’s Zakk Patterson added the under-19 men’s keirin title to the silver medal he won in the 1000m time trial on Wednesday night, with Southland’s Ronan Shearing second and Luke Blackwood (Auckland) third.

Joel Douglas, considered a real talent for the future, won the under-19 men’s 10km scratch race, the Aucklander producing a strong finish to the fast 40-lapper, with Jonathan Fish (Mid-South Canterbury) second and Jack Carswell (Waikato-Bay of Plenty) third.

Para-Cycling head performance coach Stu MacDonald was satisfied with the efforts of his charges, particularly the way Sarah Ellington (Auckland) and Nicole Murray (Waikato-Bay of Plenty) backed up after hard rides in the morning sessions.

“It’s hard to back up an individual pursuit, but they did that really well. We trialled a few things with Sarah with a bigger gear and Nicole’s execution was spot on. She’s working really hard with her coach in Cambridge and that gives her some payback, so that’s good to see.”

Riding together for the first time, world champion Emma Foy and new pilot Nina Wollaston would be better for the experience, MacDonald said.

“They’ll be learning from riding together and being under a little bit of pressure. It’s never an easy ride when you’ve got rainbow stripes on your back so I’m sure they’ll go away and make some steps forward. All-in-all it was a successful outing for us.”