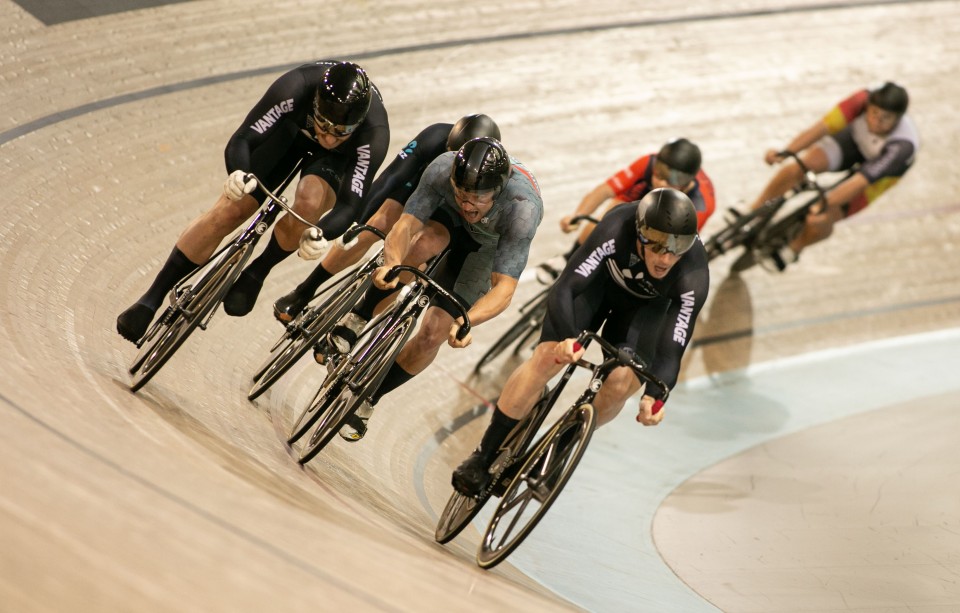 Cycling New Zealand coaches were pleased with performances from their Vantage Elite squad including those riders recently selected for the Tokyo Olympics, at the Cambridge 3 Day Carnival that finished at the Avantidrome in Cambridge today.

With a year dominated by the global coronavirus pandemic, the Cambridge 3 Day was the first elite track competition for the New Zealand riders since the world championships in February.

Young Tokyo Olympic sprinters Sam Dakin and world no 5 ranked Ellesse Andrews took out the finals of the elite keirin to complete strong performances over the three days.

There was plenty of competition in the endurance racing with the four-discipline omnium going to Scotland’s Mark Stewart after a final sprint on the last lap was needed to separate him from former world champion Aaron Gate.

“It was good to get some competitive racing because we have had none. I’m happy where things are at – we know where the riders are at and what we need to do,” said Cycling New Zealand male endurance coach, Craig Palmer.

“They are all tired but we have a road camp in Queenstown next week which will earn them a break over Christmas.”

“I was really pleased with the team pursuits on Thursday. And we have finally been able to get in some competitive racing. I was not expecting too much to be honest but it has provided an excellent platform for us looking ahead.”

National sprint coach Rene Wolff was impressed with the times from his sprinters and the improvement from the younger riders including Tokyo-bound Sam Dakin and Ellesse Andrews who both won the keirin finals today.

“We are creating a team of broad abilities. It is not natural that Sam Webster rolls in and wins everything and that is really important for the team to see some of the younger riders putting their hand up,” said Wolff.

“I am happy and pleased with the performances and level of their competition, and we are now looking forward to prepare for nationals in February and on to the Games.”

Waikato’s McKenzie Milne was rewarded with a bold early move to take out the opening 7.5km scratch race of the women’s omnium while Vantage Criterium National Champion Olivia Ray (Auckland) claimed the 7.5km Tempo race in a tight battle with Botha and Shields, who won the elimination.

It came down to a final Points race and the final sprint for Shields to gain the Vantage national title.

Dakin produced an exceptional move to earn a place in the final in his semifinal ride in the keirin, and pushed around the outside of the pack to take the final ahead of good friend Callum Saunders, while Andrews got to the front and dominated the women’s final.

There was real excitement in the men’s omnium competition with the overall four-discipline event coming down to the final sprint on the last lap of the 40km Points race where a photo-finish was needed to separate Stewart and the in-form Aaron Gate. The pair were locked going into the final points race and still locked for the final sprint where Stewart was given the nod by the narrowest of margins.

Stewart, the Commonwealth Games Points gold medallist, is currently residing in the region.

In other racing Waikato-BOP’s Seana Gray continued her good form with victory in the Under-17 elimination race; Auckland’s Nate Boness and Aimee Blackmore took out the under-17 keirin.