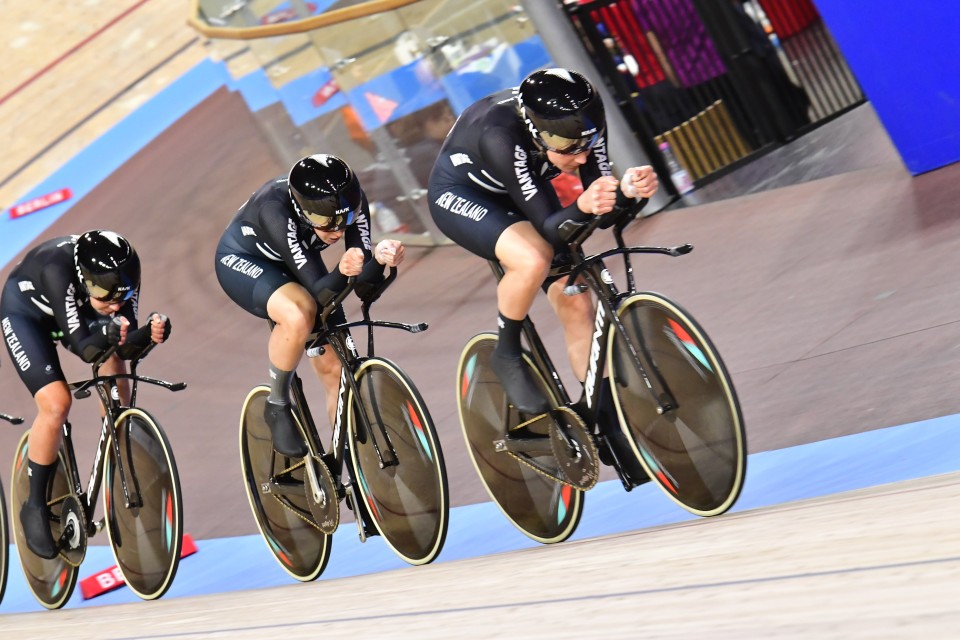 New Zealand has won the silver medal in the men’s team pursuit in a remarkable final on the second day of the UCI Track Cycling World Championships in Berlin.

The Vantage elite men’s team clocked 3:49.712 in the final but could not match a stunning world record effort from Denmark who won in 3:44.672.  The world record has been smashed by nearly four seconds at the championships.

It is the seventh time in the past 12 years that New Zealand has won a medal in the men’s team pursuit at the world championships, since establishing its high performance programme.

They were 2.5s behind the Danes at the halfway mark, clawed it back to 2s at 3000m before Denmark powered away to blitz the world record, which had been lowered several times during the championships.

“It is our first world championships for a couple of years with a fully developed team that is really cohesive and on the same path and plan,” said Jordan Kerby, who moved to New Zealand from Australia three years ago.

‘We went out there over the last two days and we executed as fast as we could ride.

‘We went into the final with the idea of racing this as fast as we could and what would-be would be. We could only control how fast we can go. It is a great improvement and a great stepping stone towards Tokyo.”

“It is getting faster and faster and in an Olympic year times are going to tumble even further. Teams are going consistently under 3:48 now and it is turning into a bit of a sprint race. If you are not keeping up, you are being left behind. I think we are on the right trend with that at the moment.”

Earlier the New Zealand women’s team pursuit did not advance to the medal round.

Having already qualified for Tokyo, they have trained through the championships, deciding on a single peak in their Olympic preparations.

They also decided on a brave decision to take on USA in their virtual semifinal, rather than lower their sights to earn a place in the bronze medal race as a fastest loser.

They closed to within 0.2s of the Americans at 2000m and despite two final kilometres in 1m02s each, they finished with a 4:13.883 performance. The Americans went on to win the final over Great Britain with the Kiwis settling for sixth.

“We have qualified for Tokyo so chose not to peak for this and so prepare early for Tokyo. We had a handful of track sessions rather than probably a dozen like many in the previous two or three weeks.

“We tried to go out to win that heat and put pressure on USA. We had a couple of technical execution lapses but we went out there with great intent and were running under world record pace but it came unstuck as it invariably does unless you are perfect.

“We have proved to ourselves that we are right there and can match the speed of the others.”

Machejefski said there were other pluses for the campaign.

“We had the integration of Jaime Nielsen back after becoming a mum and tonight she was super-strong. That was one of the most encouraging things as well.

“We will be able to have a smaller break than others and get into road and aerobic training, hit the gym and get strong before we head away for our final Olympic build up in May with some racing and training in Europe.”

Earlier, Natasha Hansen broke her own national record in sprint qualifying, clocking 10.638 but both she and teammate Olivia Podmore were beaten in the first round by Ukraine’s Irena Starikova and China’s Tianshi Zhong, respectively.

Sprinter Sam Webster made it through to the quarterfinals of the keirin competition while teammate Eddie Dawkins lost out in the repechage after being blocked in, while Nick Kergozou was unplaced in the scratch race.

Tomorrow will see Holly Edmondston compete in the omnium, Nick Kergozou in the 1000m time trial and Corbin Strong in the Points race