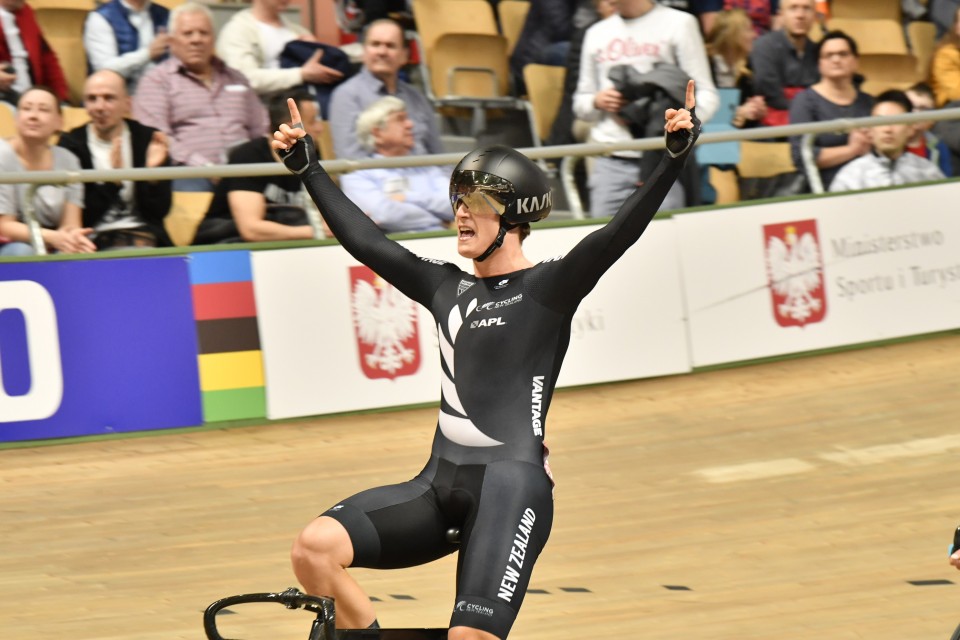 Twenty-year-old Campbell Stewart has claimed his first elite rainbow jersey after victory in the omnium on the fourth day of the UCI Track World Championships in Poland.

The Vantage Elite New Zealand rider produced a stunning display, lapping the field with Frenchman Benjamin Thomas late in the race which gave him a commanding lead. Stewart covered the field over the final 15 laps to claim the title in a brilliant performance, going on to win with a total of 137 points ahead of Thomas on 119 and Ethan Hayter (GBR) on 118 in the four-race omnium.

This sits alongside the junior world title he won in the omnium in Switzerland in 2016 and is the third rainbow jersey won by New Zealand male riders in the omnium following Hayden Godfrey at Manchester in 2008 and his Vantage Elite teammate Aaron Gate at Belarus in 2013.

Stewart had a consistent display throughout with a third place in the opening Scratch race, fourth in the Tempo race and fifth in the Elimination to push him equal on 102 points at the head of the competition with Hayter ahead of his commanding finish in the Points race.

“It was a crazy race. Unreal and I am trying to get over it. I went out there not really knowing what would happen. I pushed hard and made the right moves and it came off,” said Stewart.

He had a special moment with his parents who made the trip to Poland.

“Obviously they believe in me but I wasn’t sure it was going to happen this year. To be able to pull it off for them here is pretty special. No doubt they would have been kicking themselves if they didn’t turn up.”

His parents may have wondered if they had made the right call after Stewart was one of the New Zealand riders affected by illness this week.

“I was pretty low a few days ago when I was unwell. I raced the first race of the team pursuit but had to sit out the rest because I could barely ride at that point. I had nearly four days off just cruising because I didn’t want to hit the system too hard. I guess it worked out well today and maybe I was fresh.”

He took his chances late in the race to make the winning move, something he decided on the spot rather than having a pre-conceived plan.

“I was counting the points, making sure I was ahead of Hayter. The legs were feeling good with about 30 laps to go and I thought if I can keep close and win the last sprint at least that I could leap-frog and jump up.

“I had to also look at the guys who were only a few points behind so when Benjamin went I went straight on to him and followed. I was lucky to jump on his move and pushed it with him while the rest of the group looked at each other to decide who was going to work. It ended up working out in my favour and it’s pretty unreal.”

In other racing today Kirstie James finished fourth in the women’s 3000m individual pursuit. She qualified fourth fastest in 3:28.407 to earn a bronze medal match against Germany’s Lisa Klein. The German stepped up to claim the ride-off with James settling for a well-earned fourth place, while teammate Bryony Botha was fifth.

Both Ethan Mitchell (9.902s) and Sam Webster (9.880s) qualified in the individual sprint after a white-hot qualifying session headed by Jeffrey Hoogland (NED) in 9.572s. The Kiwi pair won through to the first round of match racing with Mitchell bettering Phillip Njisane (TTO) and Webster beating Matthijs Buchli (NED).

While Webster lost the second round to second qualifier Harrie Lavreysen (NED), Mitchell edged Frenchman Sebastien Vigier by just 0.007s to move to the quarterfinals. He came up against defending world champion Matthew Gleatzer, losing in two straight rides in the best of three series.

Tomorrow’s final day sees Olivia Podmore and Natasha Hansen in the keirin as the only New Zealanders racing.

Caption: Campbell Stewart celebrates and on the podium after victory in the omnium at the UCI Track World Championships in Poland. (Guy Swarbrick Photo)