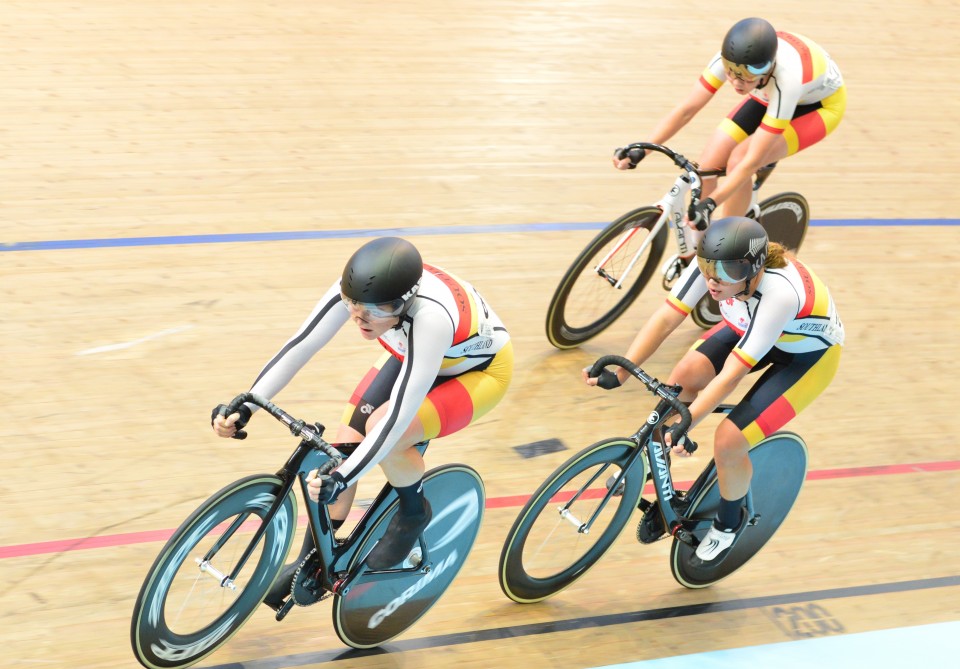 New Zealand endurance rider Kirstie James underlined her class with a dominant display on the final night of the Vantage Elite and Under 19 Track National Championships at Invercargill.

The Southland rider, who had finished third in the elite women’s individual pursuit earlier in the week, rode in the second team sprint side, anchored the southerners to a team pursuit gold and then produced a standout display to take out the 20km points race in a finale to the four-day championship at the SIT Zero Fees Velodrome.

James, who took two laps on the field during the 20km, 80-lap race, received fantastic support from her Southland teammates, Nicole Shields and Rylee McMullan who also took a lap and banked the silver medal, with Holly Edmondston (Mid-South Canterbury) third.

“It’s been an excellent day. I wasn’t sure how my legs would pull up after doing the team pursuit and team sprint, but to be honest my legs were so tired that I had to make smart decisions and that really worked in my favour today,” she said.

“Massive thanks to Cycling Southland and the girls, they did so much for me, I really appreciated it. I also want to say that it was really sad not to have some of my teammates who are recovering from crashes and some of the girls who crashed today. I hope I did them proud.”

Regan Gough and Campbell Stewart did their best to break-up the race, but it was Gate who added the title to his individual pursuit crown from Friday, Stewart taking silver and Strong bronze.

“I didn’t think I was going to have the speed in the sprints to match Corbin and Campbell based on what happened last year, so I put on a bigger gear to try and get a lap on everyone and it went the other way. I won a couple of the early sprints and got enough of a buffer to be able to chip away at it right until the end.”

Southland claimed both the women’s and men’s elite and under-19 4000m team pursuit titles, the women’s team with an impressive line-up including New Zealand representatives James and Shields, McMullan and junior world championship rider Emily Paterson.

“The first time we’d ridden as a team was this morning in the warm up, but we came together and produced a really nice team pursuit ride,” James said.

The young Canterbury Black team won silver, backing up after breaking the championship under 19 record with Charlotte Spurway, Jenna Borthwick, Mikaela Grant and Amelia Sykes in the morning, while Auckland took bronze.

The Southland men’s team of New Zealand riders Strong, Tom Sexton and Nick Kergozou, along with Hamish Keast, had their eye on breaking their own championship record in the final, but had to settle for the gold medal after a messy catch against Canterbury, with Waikato-Bay of Plenty taking bronze.

The Waikato-Bay of Plenty Gold combination of Sophie de Vries, Lily Cawood and Prudence Fowler were too strong for Canterbury Black (Borthwick, Sykes and Grant) in the gold medal ride for the under 19 women’s team sprint. Southland’s Alana Breen, Ciara Kelly and Rhylee Akeroyd won bronze.

Tasman’s Kaio Lart took out the under-19 men’s elimination race after Waikato-Bay of Plenty’s Zakk Patterson was relegated to second after the race, with Ronan Shearing (Southland) third.

The Vantage Elite track squad will now have a two-week break before setting their sights on the final campaign through to the Tokyo Olympics.