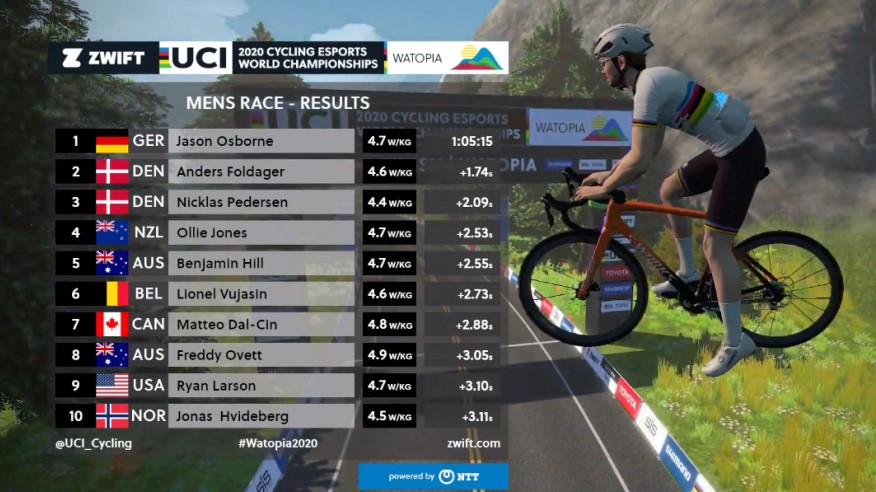 Canterbury cyclist Ollie Jones pushed so hard that blew up his trainer in the final sprint of the inaugural UCI Zwift Esport World Championship this morning.

Jones finished fourth in the Esport event with he and World Tour professional Ella Harris representing New Zealand at the first-ever world championship in the fast-developing world of online racing which has boomed since the advent of the coronavirus. Harris finished mid-pack in 29th place in the event won by Ashley Moolman Pasio from South Africa.

Jones and Harris became prominent in this form of the sport after both won the Zwift Academy global competition which earned them a one-year professional road contract.

Harris has gone on to become a key fixture in the Canyon SRAM World Tour team, and has only just left isolation back in New Zealand after a challenging year in Europe including breaking her femur during a training ride in Italy.

Jones, an integral member of Canyon’s Zwift Racing team, had prepared well for the 50km online event after his Canyon Esports won the inaugural round of the Zwift Pro Series while he also competed on the road in the Tour of Southland.

The esport race was progressing well for the Christchurch rider, given he had to race in the early hours of the morning, sitting in the lead bunch approaching the final climb to the finish.

“With about 40m to go the trainer that we were all sent, which transmits the power information to Zwift, just blew up,” Jones told Newstalk ZB.

“It overheated and was reading no power. My last 50m of the race was just on momentum. So fourth place I am really happy with but I am rueing what might have been otherwise.

“We were on the final climb which was a 1min 25secs sharp effort at the end and when you came around the last corner with 200m to go it flattened off. That where I was starting my sprint for the line. We had a bunch of 40 at the bottom of the climb but it was strung out a bit. Rounding that last corner there was one guy with a two-second gap and then a group of six or eight of us in contention for the podium.

“The last section was all above 800 watts. When you are doing that for more than a minute, I guess it builds up quite a lot of heat in the trainer.”

Jones said he enjoys mixing racing on the road with the indoor trainer races online.

“The Zwift races are a lot shorter. Most of the road races I do are around the 150km mark so a Zwift race at only 40 or 50km is a lot different. In a road race you have time for a break to get up the road and get your team together, come up with the tactics and bring it back. But in Zwift it is a lot more intense and you don’t get that sort of gap so you keep it together a lot more.

“I was the only kiwi in the race and there were teams of up to eight riders like the Belgium team. I did not have to do much and was more reactive than proactive and I could use my energy a lot more effectively.”

Jones will prepare for the next series of the Zwift Pro Series starting next month while he is targeting the Vantage National Road Championships in Cambridge in February.

In the women’s race, Moolman Pasio attacked from a front group of 25 riders at the base of the final climb to the finish and then held off Sarah Gigante of Australia to take the win by digital inches.

Moolman Pasio, who is set to join the SD Worx team in 2021, said she had spent the last five weeks preparing for the race. She took three weeks off after the Tour of Flanders and then began training specifically for this event.