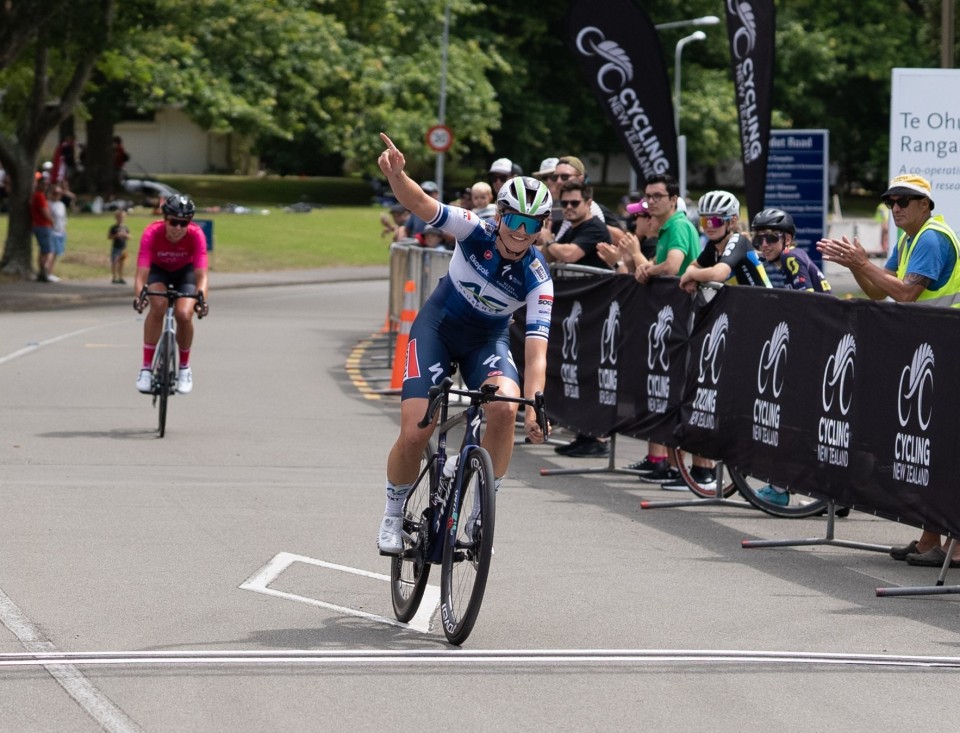 Ally Wollaston continued her winning start to the New Year when she defended her title at Cycling New Zealand’s National Criterium Championships at Palmerston North.

There was plenty for the locals to cheer about, with local Manawatu professional Luke Mudgway adding his name to a prestigious list of previous national champions, when he claimed the elite men’s honours.

Wollaston, who won the criterium at the WorldTour race at Tour Down Under in Adelaide last week, showed her sprinting qualities to pip Botha after dominating a small field in the elite women’s race.

There were 120 riders competing over six age groups for the National Criterium Championships, sponsored by the Professionals, and staged on a unique course inside Massey University, that included longer-than-usual straights and a challenging small hill.

National mountain bike cross country champion Sammi Maxwell pushed off the front early with Wollaston and Botha, who quickly put time into the rest of the field.

From there, the two training mates from Cycling New Zealand’s national track squad, pushed clear to open a one minute gap of the chasers. While Botha turned up the heat, Wollaston had too many wheels in the sprint finish.

“I really wanted to race aggressively. There were not too many of us out there so I wanted it to be a well-deserved win, so I am happy,” said Wollaston.

“Bryony was riding so strong today. If I wanted to be of the front with someone, it would be B. I was definitely relieved to hear the time gaps get bigger and bigger. We were able to play around about and try to out-think eachother – which made the race fun.”

The men’s race was dominated by riders from the Bolton Equities Black Spoke team, who provided some early speed before the experienced James Fouche pushed clear.

“James ripped it up the final climb before Paul Wright and George Jackson took over and lead me out. I just had to open up at the end. The course suited a strong lead-out and I was lucky to have a team that was so strong and ripped it,” said Mudgway.

“I had heaps of family and friends were which was good. I don’t get to race in front of them very much, so it was nice. “

It is part of a back-to-the-future role for the former track rider, who has turned back to sprinting for the Black Spoke team.

“We didn’t really have a sprinter last year and our coaches suggested I should consider it. I’ve worked so hard and it is starting to pay dividends.”

There is no rest as Mudgway joins his Black Spoke team in Australia this week when they compete in a WorldTour race for the first time at the Cadel Evans Ocean Race.

“That’s really exciting and the chance to put the team on the map, so hopefully we can get a really good result there. Then we will be all-in for the national championships in Tokoroa next month.”

Earlier Cambridge rider Maui Morrison edged his rivals to claim the under-19 title from Wilson Hannon and Marshall Erwood in a sprint finish, with the trio receiving the same time.

“I am pretty happy with that result. I was not expecting it as the legs weren’t feeling that great before it,” said Morrison. “We were all panicking when James Gardner went off the front and was so fast and so I thought I just have to go now or he is gone.”

Wanaka’s Muireann Green also had to dig deep to hold off Auckland’s Ruby Spring (Auckland) and Rangiora’s Kirsty Watts who were awarded the same time in the sprint finish of the under-19 women’s race.

“I am really stoked. I’ve been training hard for this,” said Green, who was part of the Black Magic women’s team, with several of them gaining experience racing in Europe last year.

“The course was amazing and the girls gave me such support. I will now look forward to nationals riding with the team and then off to Occies.”

In other racing Josh parsons from Christchurch won the under-17 men and Paraparaumu’s Millie Donald prevailed in the under-17 women.