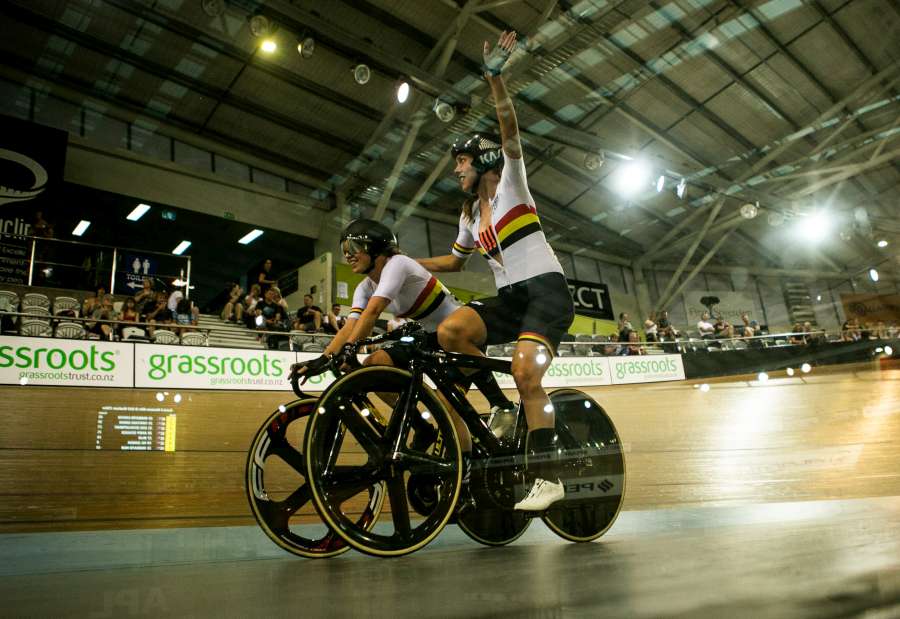 The Vantage Elite squad, headed by their Tokyo Olympic squad, produced some eye-catching displays on the opening day of the Cambridge 3 Day at the Avantidrome.

In the lead-up to the event, Gate rode a new national record with a solo time trial in the 4000m individual pursuit.

Commonwealth Games champion Webster rode within 7/1000th of his New Zealand sprint record in qualifying with all of the Tokyo Olympic sprinters producing outstanding times. Webster topped qualifying in 9.622s for the flying 200m, which was a blink off his national record set at the world championships in Berlin before lockdown.

Mitchell was second fastest on 9.691s, only 0.04s from his best set at the 2018 Commonwealth Games on the super-slick Brisbane track, with fellow Tokyo-bound sprinter Sam Dakin third fastest with a significant personal best in 9.732s.

Andrews, the sole female sprinter selected for Tokyo, topped qualifying in the elite females in 10.760, a personal best and only over 0.15s outside the national record.

The strength of Buchanan proved the key as she and Jessie Hodges outlasted fellow Vantage Elite teammates Bryony Botha and Ally Wollaston in the 25km Madison.

The two-rider event is a points race with sprints every 10 laps, with one rider in play at all times, swapping to the teammate with a hand-to-hand sling-shot motion.

Wollaston and Botha won three of the opening five sprints to claim the lead before the CNZ Development team of McKenzie Milne and recent national criterium winner Olivia Ray put a lap on the field to edge in front. However Buchanan, who will become a triple Olympian in Tokyo next year, blew the race apart and together with Hodges won the final three sprints to claim the title.

Vantage was second with the CNZ Development third courtesy of the 20 bonus points for lapping the field.

World silver medallists Gate and Stewart had to work hard before showing their class in the men’s Madison over 40kms.

However Gate turned up the heat with a stunning ride supported well by Stewart as they put three laps on the field to claim overall honours with 113 points.

Stewart, the 2018 Commonwealth Games points race gold medallists, and Hegyvary won two of the last four sprints, including the final double-points dash, to finish second on 71 with Kerby and Gough third on 58.

On Thursday Gate set a New Zealand record for the 4000m individual pursuit in 4:09.22. His solo ride, which needs official ratification, was more than three seconds inside the previous mark set by Hamish Bond also at the Avantidrome. He joined in a session with the women’s team pursuit squad that rode an Olympic simulation with two full 4000m rides on target.

Some of New Zealand’s leading Para-cyclists are also competing with Waikato-BOP’s Anna Taylor recording a personal best to win the women’s 500m time trial in 39.139s, while Auckland’s Nick Blincoe took out the men’s 1000m time trial in 1:07.866.