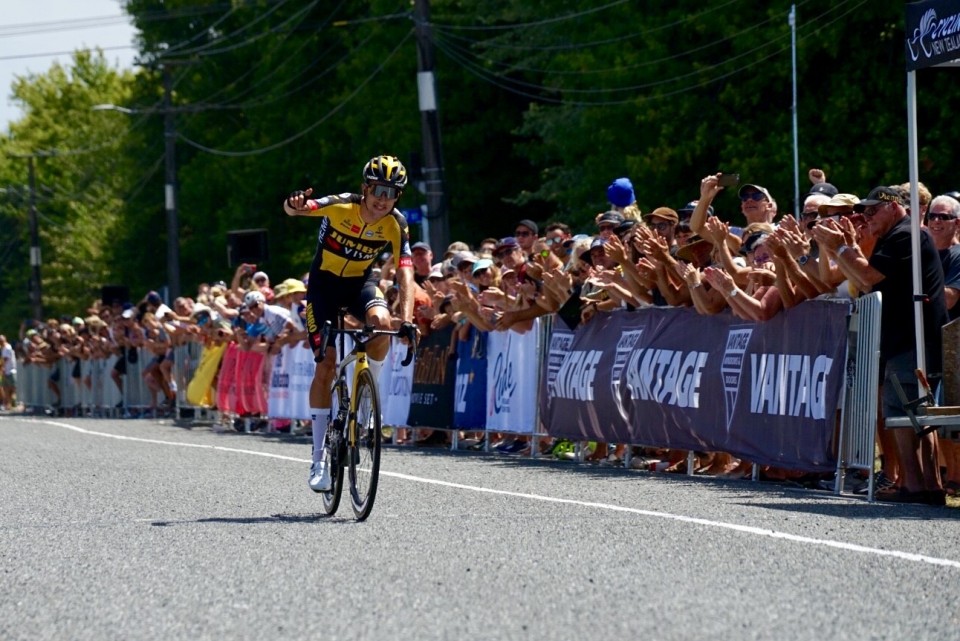 The New Zealand jersey will be on display with pride in the major cycling races in Europe after WorldTour professionals Georgia Williams and George Bennett claimed respective road race crowns at the Vantage Elite Road National Championships in Cambridge today.

Williams, who will ride her fifth season for Team Bike Exchange, sprinted her way to her second road race title in the elite women, while Bennett (Team Jumbo-Visma) claimed his first national championship with a stunning solo display.

The Vantage Elite National Championships were staged for the second time as part of the RIDE cycling festival in Cambridge, which attracted some 800 entries for the Gran Fondo on Saturday.

Both Williams and Bennett made late decisions to head home for the summer, both getting out of managed isolation before Christmas, giving a limited build-up for the championships.

Williams went on the break from the first climb of French Pass at just 7kms of their 130km race along with local rider Kate McCarthy, who rode in the break solo last year before being caught by eventual winner Niamh Fisher-Black within sight of the finish.

This year the pair opened a 35 second advantage after the first lap of three loops, as Sharlotte Lucas (DNA Pro Cycling) and then Tokyo-bound track rider Jaime Nielsen joined for the chase. However with the second of three laps completed that gap had opened to 55 seconds.

While Lucas pushed on bravely on her own, closing tantalisingly close on the final lap, McCarthy and Williams continued to share the work as they stayed clear.

Williams showed her experience to come off McCarthy’s wheel in the sprint to claim the road race honours and complete an outstanding weekend before she heads back to Europe.

“It was in the back of my mind to go early because if I waited too long the sprinters might have been able to hang on. I was a little bit uncertain that maybe I had gone a little bit too early but I knew Kate was super-strong and we would be ok,” said Williams.

“It is great for my team as well for me to win both jerseys and it’s a real honour to take them on to the WorldTour again.”

McCarthy deserved her place on the podium with another front-running effort for the policewoman who mixes elite cycling training with her fulltime career.

“It was probably a bit early to go but when you see someone like Georgia go, then you want to go with her. It has been pretty tough fitting in training with a fulltime job but I’m lucky that I had the last three weeks off so it’s been a good training block.”

Lucas, who will head to the USA to join her continental team DNA ProCycling, earned plaudits for a brave solo chase.

There was concern when a 21-strong break that whittled down to 14 riders, including nine from the powerful Blake Spoke Pro Cycling team, opened a lead of over four minutes in the men’s race over 174kms.

Bennett joined with former under-23 champion Michael Vink (St George Continental) and time trial winner Aaron Gate (Black Spoke) to emerge from the peloton to reduce the break under two minutes on the second of four loops of the testing circuit and finally make the catch on the last climb of French Pass.

The Jumbo-Visma rider pushed at every opportunity but ironically it was once on the flat with 8kms that he launched again, opening up a 10 second advantage. He turned on the after-burners to ride home solo winning eventually in 4:15.17 with nearly two minutes to Stewart with Torckler third, after Vink was relegated for venturing off his line in the sprint.

“Honestly it has not sunk in yet. I am sure I will get home and think about what I am wearing all year – a big silver fern – man it makes me so happy to think about that,” said Bennett.

“I was down and out a week ago and wrote myself off. I was a month behind last year and I was doing a workout on the time trial bike and I was not there. Then I had a really good TT on Friday and that picked me up quite a lot.

“Today I went too hard up the hill the second time and everyone was better than me. I told myself to stay calm and weather it out.

“I just kept going and kept going. On every pinch I just squeezed and squeezed them. That was what I tried to do to Aaron (Gate) because I knew he was the danger man.

“Then I just kept going and going until finally no-one came with me. I’ve been trying for this title for 10 years. I have always wanted to win the jersey and to be able to wear it with my team all year on the WorldTour is so special.

“I am excited and proud to wear that jersey – take it to Europe and represent New Zealand Cycling because it is special thing.”

Auckland’s Georgia Danford prevailed in the sprint over the Velo Project pair of Henrietta Christie and Annamarie Lipp to win the under-23 female title.

The diminutive Canterbury rider Jack Drage (NZ Cycling Project – MitoQ), who was also awarded 2020 junior rider of the year, latched on to the back of the chasers to finish sixth overall and claim the under-23 crown in his first year in this age group from Keegan Hornblow (Fruzio ILABB) and Reuben Thompson (Southland) who heads away this week to join the Groupama-FDJ Development team.