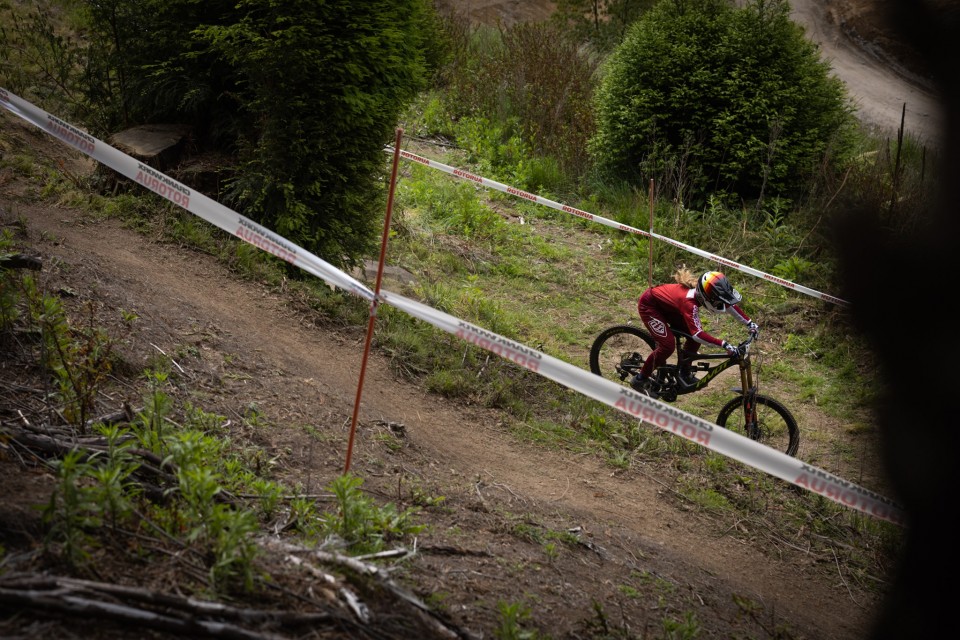 Neither Covid-19 nor the weather could stop Crankworx Rotorua, and while there were no spectators, there was still massive celebrations as two local riders took the top spot in the UCI sanctioned Downhill event in Rotorua last week

The weather held off for the Pro Women’s field and the first of the top men, who were served up tacky spring dirt, with the later part of the Pro Men’s field had to contend with the rain.

“In the gate it wasn’t really raining,” said New Zealand’s Louis Hamilton. “I could see it was, and probably maybe 30 seconds into it the goggle lens started filling up with a bit of rain. I entered the forest with a few speckles on the lens but could see. There weren’t too many issues with vision. Certainly, coming out into the open it was wet.”

Hamilton clocked a 2:51.038 and moved into the hot seat. And then the skies opened in earnest. The rest of the field battled through the wet, no one able to beat his time.

“It’s always been a dream, but to win in those conditions…it’s pretty unlucky for the field,” he said. Past winners and other top riders including Sam Blenkinsop, George Brannigan and Brook Macdonald dropped in after, their times slowed by the conditions and 6+ seconds behind. “I guess for me it was good luck, and you’ve gotta take the wins where you can…it’s still work to try and win. It’s pretty surreal at the minute. It hasn’t really sunk in.”

Tuhoto-Ariki Pene placed 4th and commented on the awesome feeling of racing on his tribal mountain (Ngongotaha) and to be next to his family and friends after months of globe trotting racing. Pene felt that he pushed himself despite the weather conditions out there today.

Local young gun Lachlan Stevens-McNab is inspired by the athletes he is getting to race saying ‘It’s cool being out there with all the guys I’ve looked up to my whole life of riding! They are all helping me and are really supportive. The course was so slippery out there today but heaps of fun’.

Another racer in disbelief at her win, the women’s winner. Jenna Hastings has been working her way up the ranks as a teen, taking wins on youth podiums. Today as her first pro Crankworx win was officially announced, she sat in the hot seat in tears, before being drawn into the crowd of family and other female competitors to be congratulated.

“It’s unreal,” said the 17-year-old. “I had a bit of a mistake at the top…slipped a pedal, clipped my ankle. Just tried to hold it together the rest of the way and it went pretty smoothly.”

Hastings crossed the line in 3:15.842, over six seconds ahead of Shania Rawson (who took second) and Casey Brown (who took third).

Check out the winning runs here.