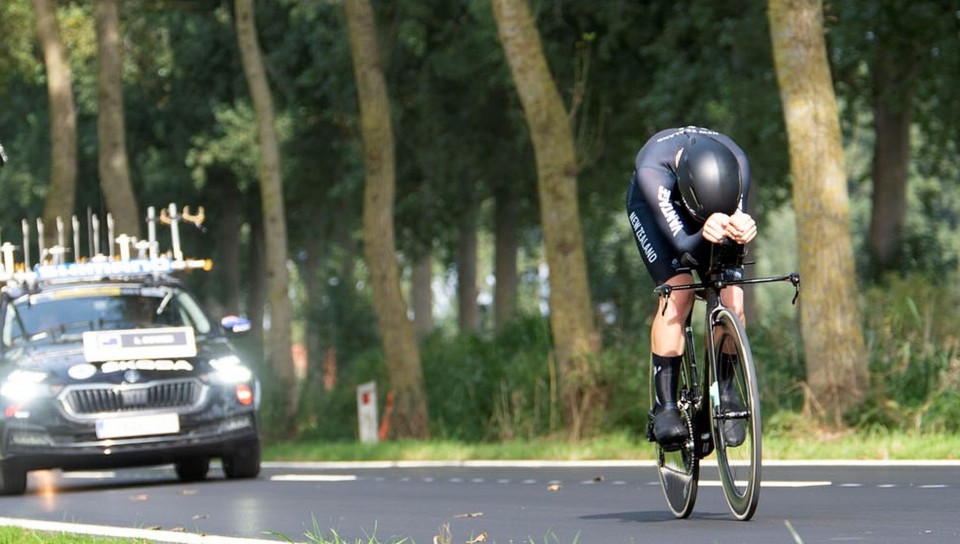 Carswell (Cambridge) finished 23rd in 27m13.23s and Bower (Auckland) 25th in 27m16.65s over the 22.3km test from the North Sea resort of Knokke-Heist to Bruges. Both riders averaged over 49kph to be the leading riders outside of Europe and North America.

Both young riders, without the benefit of recent competition in this discipline under the covid environment, raced their first time trial since February’s national championships in New Zealand.

“It’s the best I could have ridden on the day. I paced it well and the legs felt pretty good. It went pretty well,” said Carswell.

The flat terrain meant that pacing was crucial to a good result.

“It was so absolutely dead flat, something like 44m of gradient over the whole race. I was trying to rein it back in a bit over the first half but got a bit too excited and opened up the arms a little bit. I ended up doing about the same for both splits so I was happy with that.”

Bower liked the course, although he would have enjoyed some bumps in the road.

“It was fast and a cool course although rolling would have suited me better. I came over half way through August and managed to do a couple of local races which was not the best build-up for a time trial, but we both did good efforts today.”

The two riders are buoyant about the road race on Friday (NZ time) when they will be joined by South Canterbury’s Mitchel Fitzsimons.

“We will recce the course tomorrow. From the looks of it, the road course suits our riding style. All three of us like rolling terrain and not too hilly so it should be good,” said Bower.

Carswell rates their chances in the 121km race which comprises eight laps around Leuven near Brussels, with 990m of elevation per lap.

“The three junior boys are all looking forward to it. We all want to make it a good hard race and we definitely have the fire power either to have someone in the break or a man up in the sprints, so the race could go either way and we should be up there.”

The Vantage New Zealand team is not represented in the mixed team time trial tomorrow, with a training day set aside on the various courses on Thursday ahead of racing on Friday.

The Junior Men start the road racing action on Friday from 8.15am local time. They are followed in the afternoon by a powerful Vantage New Zealand under-23 men’s group that comprises time triallists Logan Currie and Finn Fisher-Black, joined by national road race champion Jack Drage, and the WorldTour-bound pair of Reuben Thompson and Tokyo Olympian Corbin Strong. The under-23 men’s race over 161km from Antwerp on to the loop circuit around Leuven.